This post is a continuation of a series of “Then & Now” images from Lewis Reed’s Photo Collection alongside photographs of how they appear today. Lewis Reed worked hard to preserve a visual history of Montgomery County, Maryland and surrounding area long before automobiles were even around. As early as 1910, he toured on his motorcycle across the state of Maryland and took photographs of many historic locations. Taken approximately 109 years apart, these photos takes us back in time to Clarksburg, Maryland at the intersection of the main road between Georgetown and Frederick and an old Seneca trail. The corresponding color photo is a google maps screenshot from the same location more than a century later.

The black and white image was taken by Lewis Reed in 1913, where Clarksburg Road (to Boyds) met Frederick Road (Rt 355). Frederick Road has also been known as The Georgetown Road and the Great Road. The town of Clarksburg was laid out along Frederick Road. The road was used as the stagecoach line from Frederick to Georgetown and it remains as the present main street through Clarksburg. Turning wagon ruts/tire tracks are visible in the lower left corner. The first house on the right was the Horace Willson House (still standing). Left of the Willson house was Willson’s Store, built on the site of the town’s first trading post, established by town founder John Clark (still standing). Established April 1, 1800, this was the location of the first post office in Clarksburg, the second oldest in Montgomery County. In 1842, the old trading post building was replaced with a two-story general store. The dwelling beyond the pole served as a church parsonage (still standing) and just beyond stands the Clarksburg United Methodist Church. The church was used for church dinners, 4-H meetings, and community gatherings. The vehicle appears to be a very early Ford Model T.

CLARKSBURG MAIN STREET (NOW): Over 109 years have passed and three buildings in Lewis Reed’s photo still remain. The structure on the right in the current day photo below was the Lewis General Store and the yellow vacant house a little further down the road was the church parsonage. The recently renovated Lewis General Store received an award for best restoration of a historic commercial property from the county. The charming building boasts a tin ceiling, original counters; original beams from 1750 are exposed in some areas, wood floors, and many historic details throughout. The steps to the ME Church South are still visible today on Rt 335 near where it intersects with Spire Street (about where the car is in the image). The congregation claims to be the “oldest continuous Methodist congregation in Montgomery County”. Today, Clarksburg remains a small rural town, retaining many of its 19th century structures. It is among Montgomery County’s earliest, most intact historic towns.

Due to the Clarksburg Square Road extension that now connects to Frederick Road, the Horace Willson House was relocated approximately 70 feet to the south to preserve it. The building is currently a wine and beer shop. 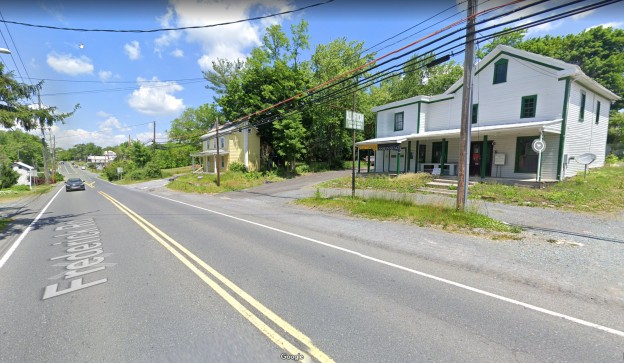 This current day image is a google maps screenshot from the corner of Redgrave Place and Rt 355.