Dodge entered the 1970s with a variety of popular vehicles – from full-size to compact. At the top of the decade, the Dart Swinger, which replaced the Dart GTS, was a very popular car, and all the mid-size Dodges were redesigned. Building on its racing heritage of the 1960s, Dodge remained the top contender on the race track with the new Challenger and Charger. In the midst of the gas shortage crisis, Dodge responded with a series of compact cars, replacing the once popular full-size offerings. 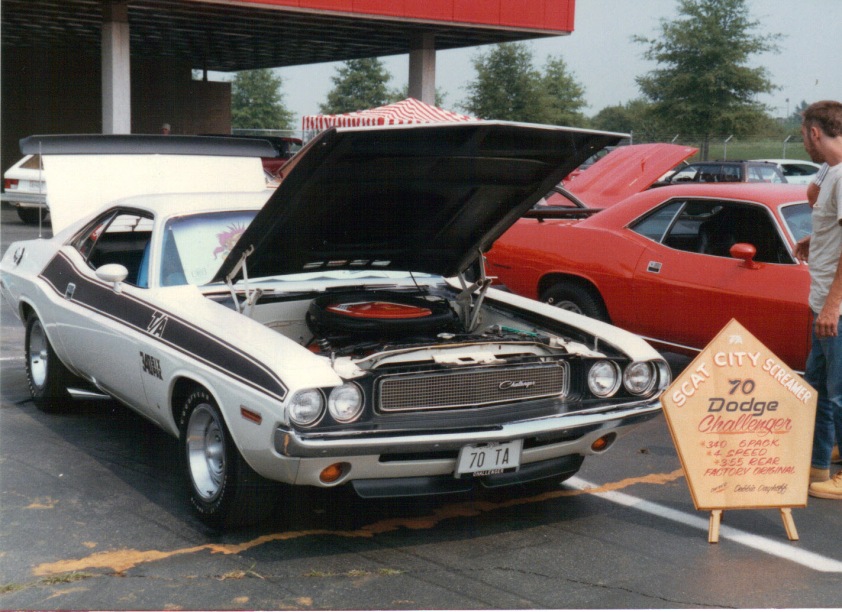 1970 DODGE CHALLENGER: The Dodge Challenger debuted in 1970. A special model, the TA was built to compete with the Mustang and Camaro. For 1970, there were numerous Dodge Challenger models, from the low-end (late-introduction) Deputy to the limited-edition top-end T/A, with the luxury SE and hot R/T in between. The Challenger would later become a classic. 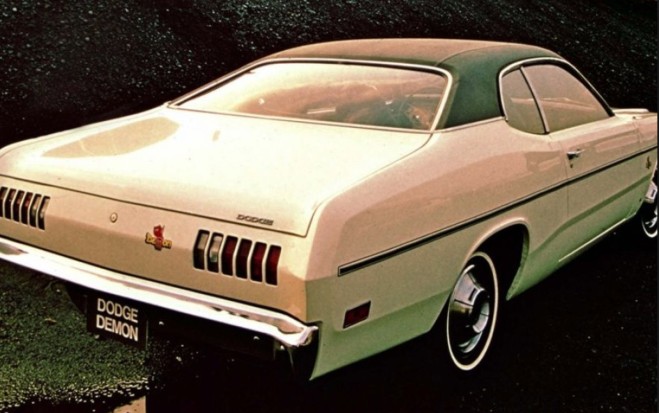 1971 DODGE DEMON: The 1971 Dodge Demon was an imitation of the incredibly successful Plymouth Duster. On the exterior of the vehicle sat controversial cartoon devil decals. The Demon logo’s proved to be too much for certain religious groups and pressured Dodge to remove it from the vehicles. In 1973, the decals were removed and the name was changed to the Dodge Dart Sport. The rest of the Dodge line was streamlined, under the Dart, Charger, and Coronet names, dropping the slow-selling Monaco and Polara. 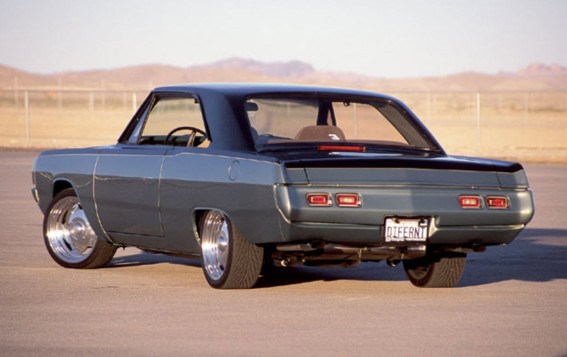 1972 DODGE DART: The 1972 Dodge Dart brought new interior and seating options, as well as a more vandal-resistant, FM-ready antenna, new sidelights, brighter backup lights, an improved shift linkage, and a bucket seat-back release. An FM radio became optional, along with an inside hood release; and the grille was updated. The reason for the Demon, which was functionally so similar to the Swinger, was the phenomenal success of the Plymouth Duster, its counterpart; but the naming, apparently done so Dodge dealers could say “Come in for a Demon-stration,” backfired as conservative groups in the South protested and did not last. Demon magically became Dart Sport.

1973 DODGE DART SPORT: Not a Demon! In 1973, the Demon fastback was renamed “Dart Sport” in response to Christian groups’ complaints about the ‘Demon’ name and devil-with-pitchfork logo. The high-performance model thus became Dart Sport 340, and 1973 saw styling changes to go along with the name change. The Dart Sport received the same new front end as the other Darts, and its taillights were changed to two lights per side, each with a chrome trim ring. These would remain unchanged through the 1976 model year. 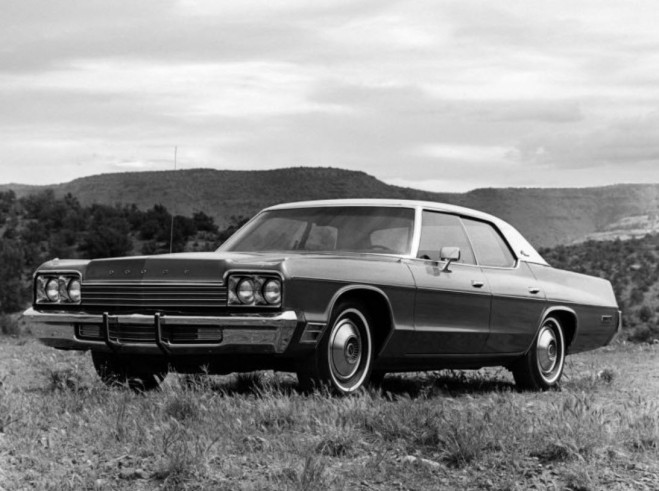 1974 DODGE MONACO: The full-size 1974 Dodge Monaco was completely redesigned for the 1974 model year with an all-new unibody platform and all-new sheet metal. However, within days of their introduction, the 1973 oil crisis began. Chrysler was excoriated in the media for bringing out huge new cars, and sales suffered accordingly. Many in the automotive press also criticized the car’s new design as being too derivative of what they thought resembled a 3-year-old Buick or Oldsmobile full-size car. The long-running (1960 to 1973 model year) Dodge Polara and Polara Custom models were all discontinued before the end of the previous model year (1973). A basic Monaco and Monaco Custom replaced them respectively. The previous Monaco was renamed Monaco Brougham. The Brougham name had long been used on the luxury option package that was available from 1969 to 1973. 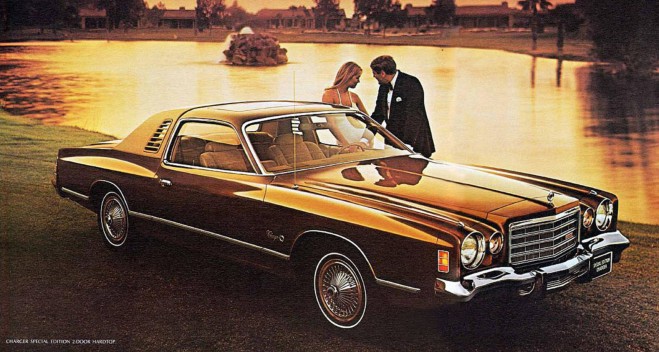 1975 DODGE CHARGER SE: In 1975, Dodge brought out the Charger SE, a clone of the Chrysler Cordoba. NASCAR racers used the 1974 Dodge Charger in 1975, amassing 14 Grand National wins. This body style would support a Charger Daytona package. The big Dodge Monaco dropped down onto the Coronet body (the Coronet was a hardtop only in 1975 and gone in 1976).

1976 DODGE ASPEN: The big news for 1976 was the popular Dodge Aspen. The replacement for the venerable Dart, the Aspen would share the same engines and three-box body style with its predecessor, but not much else. The Aspen was dubbed “the family car of the future”. Available as a 4-door wagon, 4-door sedan or 2-door coupe, it came in three trim levels – Base, Custom and SE (Special Edition). Its popularity was very bad for Chrysler due to rampant quality problems, mainly resolved by 1978.

1977 DODGE DIPLOMAT: In 1977, Dodge introduced the Diplomat. The main changes were in nameplates; the Royal Monaco was dropped, the Coronet name was dropped, Charger was dropped. The Diplomat came in two and four door versions; the two door had a Charger-ish sculpted look, and a fancy shaped trunk lid, while the four door was more formal. Regardless, the look was far more upscale than the Dodge Aspen, and buyers could get (optional) plush leather seats, which were more frequently ordered on the Chrysler. The Diplomat cost more than the bigger Dodge Monaco or Monaco Brougham; buyers could even get a full size Royal Monaco Brougham for about the same price.

1978 DODGE OMNI: The year is 1978. Chrysler Corporation attempts to stay alive, making marketing changes in their product line. Chrysler continues to offer larger cars in weakening economic times. On November 2, 1978, the new Chrysler president, Lee Iacocca, replaces chairman John Riccardo. The first front-wheel-drive subcompact car ever to be built in America hits the showroom … the Dodge Omni and Plymouth Horizon. Based on the Horizon of Chrysler Europe, the Omni/Horizon would help to save the corporation from bankruptcy. For once, Chrysler displayed a product that was right for the times.

1979 DODGE ST. REGIS: Dodge dumped its really big Royal Monacos after 1977, leaving only mid-size Monacos for 1978. For 1979, Dodge dumped he Monaco line altogether and unveiled this mid-size sedan called St. Regis. A second gasoline crisis hit the U.S. in 1979, and despite the fact that the St. Regis was somewhat smaller than its predecessor, the Dodge Monaco, it was not much more fuel efficient. At the same time, higher interest rates and Chrysler’s ongoing corporate and financial problems, all combined to keep sales low. In each year a good proportion (30% or more) were for fleet (Police and other law enforcement) use.

1980 Dodge Mirada: A very rare vehicle, the Dodge Mirada was a hardtop coupe manufactured by Chrysler from 1980 through 1983. Based on Chrysler’s J body platform, the Mirada replaced the Dodge Magnum. The Mirada is identical to two other vehicles that Chrysler also manufactured at the same era, the Cordoba and the Imperial. The Mirada was a sturdy reliable little car, but unfortunately it didn’t become very popular during its three years of production.

1981 DODGE ARIES: The Dodge Aries, otherwise known as a “K-car”, is ultimately best described as “the car that saved Chrysler’s bacon”. The Aries (and its K-car twin Plymouth Reliant) was all new in 1981, replacing the departed Dodge Aspen/Plymouth Volare. The K-cars were a huge gamble for Chrysler, who had just received loans that were guaranteed by the government prior to their introduction. Had the K-cars turned out to be sales duds, it’s very likely Chrysler would not exist today.

1982 Dodge 400: Introduced in 1982, the Dodge 400 was Dodge’s entry in a new compact luxury class that emerged in the 1980s. The 400 shared its basic K-car architecture with the Dodge Aries, the hot-selling front-drive compact sedan, but featured additional structure and enhancements that earned it the name “Super K” from the Dodge engineering team. A stylish two-door coupe and four-door sedan were the two available body styles for the Dodge 440.

1983 SHELBY CHARGER: In the early 1980s, Carroll Shelby re-entered the production automotive field in an attempt to spark new life into the industry. He introduced a series of front-wheel drive cars built for sale through Dodge dealerships. The first to be available to the public, in mid-1983, was the Dodge Shelby Charger. With the help of a close-ratio five-speed manual transmission, the Dodge Shelby Charger could accomplish a 0-to-60 mph run in 9.0 seconds and had a top speed of 117 mph.

1984 DODGE CARAVAN: 1984 was a big year for Dodge, with the debut of the groundbreaking Caravan. The market had been waiting for this kind of car. With a minivan, you could fit seven people into your van when you needed to, or a lot of cargo when you didn’t. The seats came out if you needed to carry sheets of plywood or furniture; and they were reasonably easy to get back in. You could get up and walk through the van, from the front to the back. 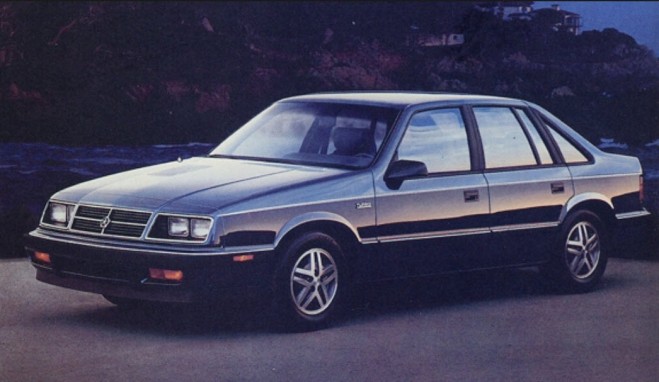 1985 DODGE LANCER: While Dodge had sold upscale-looking Aries-based cars before (400, 600), the 1985 Dodge Lancer was the first to have an upscale look and feel inside and out, with performance to back up the looks. A turbocharged four-cylinder and five-speed manual made Lancer enjoyable in the straights, and a well-tuned suspension kept it glued to the road without a “Shelby style” punishing ride. Sales were similar to Daytona, 600, and Diplomat, lower than the inexpensive Charger, Omni, or Aries.

1986 DODGE OMNI GLHS: In 1986, Dodge issued the Omni GLHS, a turbocharged car that beat many muscle cars, including contemporary Mustangs. Not many were made (500 in 1986), but the little cars earned Mopar a lot of credibility on the street. Rather than using the Chrysler Turbo II, it used a Shelby version that was similar but with slightly more horsepower and but none of the forged internal engine parts.

1987 DODGE SHADOW: The 1987 Dodge Shadow (twin to Plymouth Sundance) looked just like the Lancer, but was a down-market car replacing the Aries (though both were available for some time). This would be one of the last “K-based” cars. Contemporary magazines claimed the suspension was adapted from the Dodge Daytona.

1988 DODGE DYNASTY: The 1988 Dodge Dynasty was an odd duck, an upscale-looking car without the performance of Lancer, sold at a higher price, with plenty of chrome and a decidedly retro squarish look; derided by some critics, the car was a success, with 55,000 sold in its first year as it attracted older buyers from the even-more-expensive, less economical Diplomat series.

1989 DODGE SPIRIT: The 1989 Dodge Spirit would be a tremendously popular car, replacing Dodge 600. The car was “sport-tuned” compared with the “comfort-tuned” Plymouth Acclaim, and came with a 2.5 liter four-cylinder, turbocharged 2.5 or 3.0 liter V6. It would be the last K-based car.