This page consists of photos which I have been able to piece together on the history of Reed Brothers’ filling stations. In 1915, they began selling gas at their original location at the intersection of Veirs Mill Road and Rockville Pike. Their first “gas station” consisted of a single pump. Later (circa 1917), they became an authorized Texaco Filling Station and sold Texaco gasoline, also from a single pump. At some point prior to 1920, Reed Brothers Dodge changed over from selling Texaco and became a Gulf Gasoline dealer. Reed Brothers carried Hudson and Oldsmobile, Goodyear tires, General Electric appliances, and had the first Gulf gas station in the still-rural Washington D.C. area.

At some point prior to 1920, Reed Brothers Dodge changed over from selling Texaco and became a Gulf Gasoline dealer. By this time, gasoline retailers had determined that placing gas pumps on an “island” in front of the station, where drivers could approach from either side, provided the most efficient station layout. Reed Brothers got a new facelift and remodel in 1921, and an island with three new modern gas pumps were added. Visible pumps like the ones below, used a graduated glass cylinder to show customers the quality and quantity of gas being purchased. Glass globes, like Good Gulf, usually topped the pumps and advertised the company’s brand and name.

Reed Brothers Dodge got a new facelift and remodel in 1921. The original part of the garage was converted into a new car showroom and the service operation was moved out into the rear portion of the building. Note the three new modern gas pumps.

In the 1920s, the Gulf Refining Co. adopted a brick and tile roof station with canopy supported by four brick columns covering two front driveways. Below are architectural changes in the Reed Brothers Dodge front that were made in 1927. A modern drive-through canopy was added along with new gasoline pumps. A close-up view can be seen of the new gasoline pump-island with four pumping units along with the motor oil dispensers used at that time. The old pump island can be seen to the left along with a new “That Good Gulf Gasoline” sign. 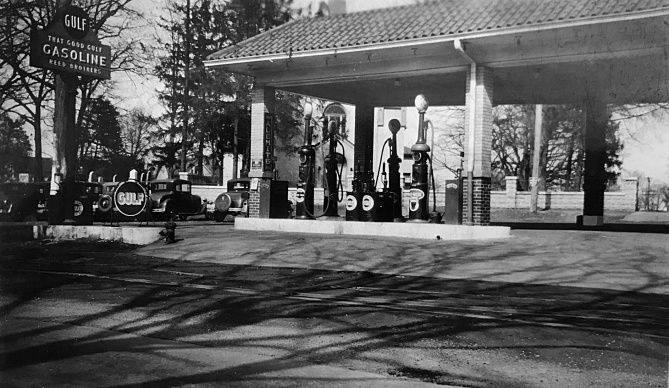 1927. In front is a large sign that reads “That Good Gulf Gasoline”. In the background is the old St Mary’s Church and Cemetery in Rockville. 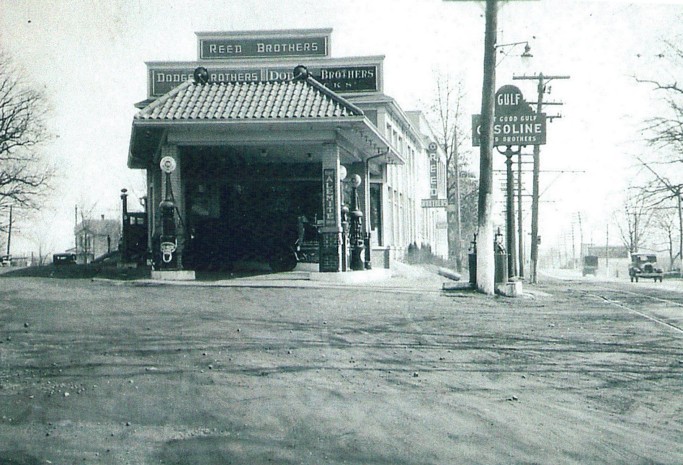 1927 Reed Brothers Dodge at the Triangle in Old Rockville at the intersection of Veirs Mill Road and Rockville Pike with Gulf Gasoline drive-through filling station. Trolley car tracks can be seen on the right on Rockville Pike.

1936 After World War II with a New Front

Reed Brothers celebrated the end of World War II with another new facelift and a whole new look.

Reed Brothers Dodge canopied Gulf Gas Station circa 1936. A closer look reveals the price of gasoline as 15 cents. On the right attached to a telephone pole is a sign pointing the way to Olney. In addition to the Gulf signage there is a small, barely visible sign below that promotes, “Clean Rest Rooms”.

Due to changes in the highway, Reed Brothers began an extensive remodeling and rebuilding program. Two-thirds of the original location at the junction of then Route 240 and Veirs Mill Road was razed and a modern Gulf Service Station was erected.

Below is a mid-1960′s photo of  the Reed Brothers Dodge Gulf Gasoline station. The famous Gulf “ice box” design dates back to late 1930’s and there were  probably more of these built than any single one of the later Gulf designs. A Coca Cola machine is visible in front of the white Dodge Dart parked in front of the service bay. The sign in the grass on the right reads, “We’re Making Deals on Gulf Tires”.