1930 DODGE BROTHERS EIGHT, DC: Despite the Depression, Dodge unveiled its first L-head eight-cylinder engine, in a 114-inch wheelbase car. The straight eight had a displacement of 220.7 cubic inches and was equipped with a downdraft carburetor. Another Dodge line, the Six, had a 109-inch wheelbase, one of the shortest ever made by Dodge.

1931 DODGE EIGHT, DG: Free wheeling was made available on the Sixes and Eights, and the Rocky Mountain ram made its first appearance as a hood ornament on a Dodge. It was to endure as a familiar Dodge trademark for the next 25 years. 1931 also saw the demise of the Dodge roadster with its fold-flat windshield and hand-buffed leather seats. 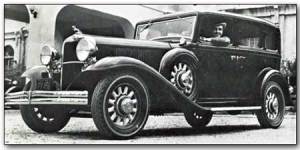 1932 DODGE EIGHT, DK: The Chrysler­ engineered Floating Power engine mountings were added to Dodge, and freewheeling was made standard equipment. A new automatic clutch was optional. Dodge held seventh place in sales as the automobile market reached its lowest ebb of the Depression with the entire industry barely registering a million units in sales.

1933 DODGE EIGHT, DO: Slanting V­shapes gave grilles a graceful new flair. Six body styles were available in the Six, and five in the Eight. Along with other Chrysler cars, Dodge adopted the silent running, all-helical gear transmission. A new Dodge Six could be bought for $595.

1934 DODGE SIX, DK: Following a steady shift in sales to the more economical Six, the eight-cylinder Dodge was re­moved from the market and the Dodge Six extended to both a 117- and 121-inch wheelbase, the latter with a different set of hood louvers. Independent coil spring front suspension was introduced and steel artillery wheels became standard. Wood spoke wheels no longer were available.

1935 DODGE, DU: During the next four years, Dodge cars appeared on a single wheelbase–116 inches. The radiator cap was moved to a place of concealment beneath the hood. Leaf springs replaced the coil in the front suspension until 1939 when coil springs were reintroduced to Dodge. These springs and other chassis components were made of a tough new steel alloy called Amola. With 155,899 shipments, Dodge was a solid fourth in sales.

1936 DODGE, D-2: By the end of the 1936 model year, 265,005 Dodges had been shipped, a rather remarkable recovery from the days of the mid-Depression only five years before. The D-2 had a new steel top that blended smoothly into the roof surface and also was wired for a radio antenna. 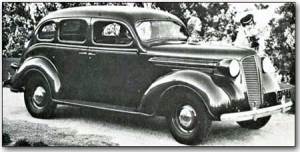 1937 DODGE, D-5: Instrument panels received quite a bit of attention for 1937 . Knobs were recessed and gauges set flush with the surface. Door handles were curved inward to prevent clothes from snagging, and built-in defroster vents made their first appearance on Dodge as in the other Chrysler cars. The addition of a hypoid rear axle allowed for a lower floor.

1938 DODGE, D-8: The parking brake was moved to a new position beneath the center of the instrument panel and designed with a pistol-grip handle. Body length was increased nearly a foot although wheelbase was unchanged, and 11-inch brake drums replaced the previous l0-inch size. Ten different body styles were offered with prices from $808 to $1275.

1939 DODGE LUXURY LINER DELUXE, D-11: Dodge celebrated its 25th anniversary with new styling that had the head lamps integral with the front fenders and a two-piece, V-type windshield. The gear shift lever was moved from the floor to the steering column. Dodge’s “Safety Light” speedometer had a lighted bead that would glow different colors depending on car speed.

1940 DODGE LUXURY LINER DELUXE, D-14: Wheelbase was extended to 119.5 inches. Sealed-beam headlights were adopted and foam rubber introduced into seat cushions. The rumble seat coupe dropped from the model line-up. At 189,643 units, Dodge accounted for 26% of the total Chrysler Corporation volume of cars built in the 1940 model year.

1941 DODGE LUXURY LINER CUSTOM, D-19: Fluid Drive as pioneered earlier by Chrysler, was made available to a lower priced car for the first time in the 1941 Dodge. Power was transferred from the engine to the transmission by fluids with no metal connection. Also introduced on Dodge were safety rim wheels.

1942 DODGE DELUXE, D-22: Series names were changed to Custom and Deluxe. Running boards were concealed, and an interesting option was a buzzer that sounded if the car was driven with the handbrake on. 68,522 Dodges were built until Dodge converted entirely to wartime production in the spring of 1942, turning out hundreds of thousands of vehicles for the Armed Forces by 1946.

1946-1948 DODGE CUSTOM, D-24: Although similar in appearance to the 1942 models, the first postwar Dodges had front fender shapes that carried into the door panels, and included replaceable cartridge-type oil filters along with a new high -capacity oil pump. The demand for new cars was so great that production continued from 1946 until 1948 with relatively little change. 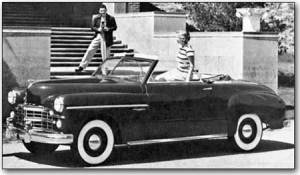 1949 DODGE CORONET, D-30: The first major postwar model change for Dodge inaugurated three new series on two wheelbases: the Wayfarer, Meadow­brook, and Coronet. The Wayfarer Sportabout was a revival of the roadster body style but with crank-up side windows. New improvements were the combination starter-ignition switch, sea-leg shock absorbers, and Gyro­Matic semiautomatic transmission.