1950 DODGE CORONET, D-34: Popularity of the four-door sedan never seemed greater than in 1950. Dodge, for example shipped out 221,791 such body styles for the 1950 model year, or over 60% of total Dodge sales. Dodge station wagons joined those of other Chrysler Corporation cars in offering the first roll down tail gate window.

1951-1952 DODGE CORONET, D-42: Body styling for both these years was identical. New Oriflow shock absorbers added a touch of velvet to the already smooth Dodge ride. The Sportabout, Dodge’s postwar roadster, was discontinued after 1951. Instrument panels adopted a leather-grained finish to reduce glare.

1953 DODGE CORONET, D-48: Dodge entered the 1953 model year with its first V-8 engine offering–the famous 140 horsepower Red Ram with hemispherical combustion chambers. About 56% of the Dodges built for the year were V-8’s. With an average of 23.42 miles per gallon, a 1953 Dodge V-8 topped all other V-8’s in the Mobil gas Economy Run.

1954 DODGE ROYAL: In September, 1953, two new Dodges were sent to Bonneville, where under the supervision of the AAA Contest Board they spent five days breaking every established record in Class C (183-305-cubic inch) and, in fact, finished with an over-all 196 speed, acceleration and reliability records. PowerFlite, Dodge’s first fully automatic transmission, also was initiated as optional equipment for V-8 models.

1955 DODGE CUSTOM ROYAL: Two and three-toned color combinations high­lighted the Dodge cars for 1955. A specialty car called the Dodge La Femme was introduced as a two-door hardtop with select colors and trim that included matching rain cape, umbrella and rain boots, and shoulder bag, stored in pockets behind the front seats. 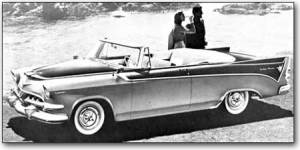 1958 DODGE CUSTOM ROYAL: Dual head lamps and the compound curved windshield were styling features for 1958. Popularity of optional equipment increased. Power steering was used on 62.5% of the Dodges built; power brakes-­34%; tinted glass–23.4%; and automatic transmission 96.4%. The Coronet accounted for 70% of the Dodges sold. An electronic fuel injection system was made available.

1959 DODGE CUSTOM ROYAL: Front and rear ends were restyled, and the swivel-type front seats became a popular option. An air-operated leveling device could be installed at the rear for extra cost. Dual taillight units were featured for the fifth year. 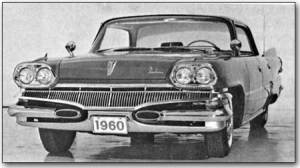 1960 DODGE DART: Dodge invaded the lower-priced market with a new strong contender called the Dart priced between $2,000 and $2,100. All Dodge cars had the unibody type of construction. Available at extra cost was a powerful new, ram-induction 383-cubic inch V-8 rated at 330 horsepower. Dodge surpassed 400,000 units in annual sales for the first time.

1961 DODGE LANCER: In keeping with the compact car vogue, Dodge brought out the 106.5-inch wheelbase Lancer powered by a 101 horsepower Slant Six engine. The Lancer utilized the latest unibody structure and was the only Chrysler Corporation car using magnesium in its instrument cluster housings. Its air conditioning, power brakes and power steering were options not usually available on compacts.

1961 DODGE POLARA: The Dart was availabe with six different engines ranging in size from the 145 hp Six to a 325 horsepower V-8 with ram induction. The Dart captured over 90% of total Dodge sales in 1961. Polara was the only model offered on the longer 122-inch wheelbase.

1962 DODGE LANCER 770: Now in its second year, the Lancer picked up a new premium series called the GT–a two­door hardtop with front bucket seats and a padded instrument panel as standard equipment. By the end of the year, the GT had garnered 29.2% of Lancer sales. A 145hp Six with a die-cast aluminum block was a new option offered in 1962.

1962 DODGE DART 440: In the initial months of production, the Dodge line centered around the newly styled Dart on a wheelbase of 116 inches. Polara became a premium trim package for Dart. In May, 1962, a new 122-inch wheelbase line of Dodge cars called the 880 and Custom 880 with a 361-cubic inch standard V-8 engine was introduced.

1963 DODGE POLARA: The longer wheel­base Dodge, now called the Polara, had a banner year. A Dodge 330 took first in the low-priced V-8 class of the Mobil gas Economy run at 21.2 miles per gallon. A Dodge also became the first car with automatic transmission to capture Top Stock Eliminator at the 1963 N.H.R.A. winter nationals. With its new 426-cubic inch wedge-head engine, Dodge campaigned drag strips with success.

1963 DODGE DART 270: For 1963, the 106.5-inch wheelbase Lancer disappeared from the line. A larger, intermediate-sized compact carried on the successful Dart name. It had a wheelbase of 111 inches and came in three series. The 1963 Dart outsold the 1962 Lancer by five to one.

1964 DODGE POLARA: The unveiling of the new hemispherical combustion chamber design V-8 was big news for Dodge in 1964. It developed 425 horsepower at 6000 rpm. Highpoint of a successful NASCAR stock car racing season was a record setting win by A. J. Foyt of less than one car length over another Dodge driven by Bobby Isaacs in the Firecracker 400–151. 45 miles per hour.

1965 DODGE MONACO: The Custom 880 line of the preceding year was given entirely new styling and a 121-inch wheel­base size in three different series; the Polara, Custom 880, and Monaco. The Monaco was a personalized two-door hardtop with four individual seats. The Custom 880 featured two four-door sedans, one with six side windows.

1966 DODGE CHARGER: The Charger became the second specialty car put into production by Chrysler Corporation that was based entirely on the fastback concept. It had a rather auspicious public announcement- – between halves of the 1966 Rose Bowl game. The Charger had head lamps that could be rotated out of view behind the grille, a single broad tail lamp, and individual, flip-down rear seats.

1967 DODGE POLARA: The Polara was restyled in the “fuselage look,” growing by 6.3 inches and gaining a blind quarter hardtop roofline. From 1965 through 1968 the vehicle was given yearly updates to its square-edged styling design. The square design of the Polara was a major departure of the rounded design of just a few years prior. In the front were dual headlights on each side of the vehicle. The dual headlight design was integrated into the grill and positioned above the chrome bumper. The Polara name would continue to adorned Dodge vehicles in various forms until 1973. 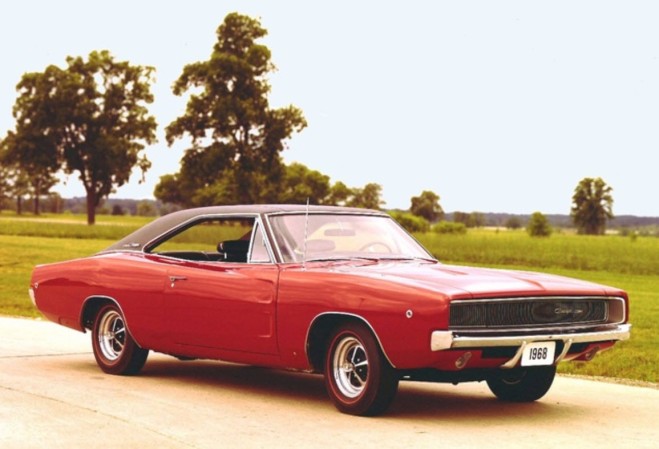 1968 DODGE CHARGER: The 1968 Dodge Charger went to a highly acclaimed “Coke bottle” side profile; Charger dropped its unconventional rear styling, and was now V8 only. Dodge set a sales record with a roughly 7% market share.

1969 DODGE POLARA/MONACO: The “fuselage look” now extended to the Polara and Monaco. Though it didn’t sell well, Dodge launched the Charger Daytona, a 180-mph stock car, with a choice of 440 or 426 Hemi, intending to dominate NASCAR.