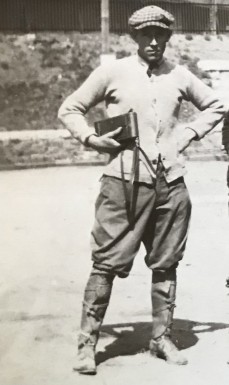 Before opening his Dodge dealership in 1915, Lewis Reed was a well-known photographer in Montgomery County Maryland. At the turn of the century, before automobiles were even around, Lewis Reed toured up and down the East Coast on his motorcycle, taking photographs of landscapes, monuments, historic places, and people.

Some of the historic locations in his photograph collection includes the Black Rock Grist Mill, Smithsonian Institution, Montgomery County Maryland Almshouse, United States Capitol, Key Bridge, Union Station and other important sites in and around the Maryland, Virginia, and Washington, D.C. area. There are also photographs of many non-Maryland locations including Virginia, West Virginia, Pennsylvania, Georgia, New York, Boston, Georgia, North Carolina, and Canada. Especially stunning are images of the aftermath of the 1936 Gainesville Georgia tornado, one of the deadliest tornadoes in American history. As his photograph collection reveals, Lewis Reed was on the scene for some of the most important events in the history of the twentieth-century, and he always had his camera with him.

Lewis Reed developed all of his own photographs. He had a darkroom in his house —  in the kitchen, to be exact — and worked at night to develop the negatives.

His photography has appeared in highly regarded history books such as, Montgomery County: Two Centuries of Change by Jane C. Sween, Rockville: Portrait of a City by Eileen S. McGuckian, and Gaithersburg: History of a City. His photographs have been featured in the Norris-Banonis Automotive Wall Calendar, on the national television show, American Pickers, and on television’s most watched history series, American Experience on PBS.

In a way, his photographs — more than 2500 in all — serve as an unwritten diary of his early adventures as an amateur photographer. My greatest pleasure now — more than 100 years later — is being able to share them.