This special post is a collection of early dirt track race photos that were taken by Lewis Reed at the Rockville Fair in the early 20th century. Held by the Montgomery County Agricultural Society (1846-1932) in Rockville, Maryland, the fair was known simply as the “Rockville Fair.”  The fair’s oval dirt track was used for bicycles, harness races and later, cars.

Since the mid-19th century, an annual county fair was held in Montgomery County for four days in the month of August. Families came in wagons and carriages to the Rockville Fairgrounds and stayed for the duration. Like many fairgrounds, the Rockville Fairgrounds included an oval track. Fairground race tracks, typically one-mile or half-mile dirt racing ovals with wide, sweeping curves and grandstands for spectators, were easily adapted for bicycles, harness racing, and the sport of car racing.

Early action shots like these were difficult to take and are fairly rare, however, all of the photographs below were taken by Lewis Reed at the Rockville Fairgrounds in the early 1910-1920s. The fairgrounds were just outside Rockville, about where Richard Montgomery High School is today. The Fair lasted four days, from August 21st to the 24th, and drew visitors from local counties, Washington, and Baltimore. As always, click the photos to get a better look.

This circa 1915 photo of an early bicycle race at the Rockville Fairgrounds gives a sense of just how popular the sport was at the time. Photo by Lewis Reed 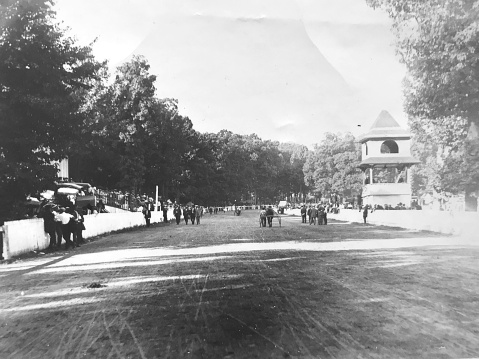 Harness race at the Rockville Fair, circa 1910. All those throngs of people had plenty to see. Photo by Lewis Reed

Harness racers rounding the bend on the racetrack, Rockville Fairground circa 1910. Photo by Lewis Reed 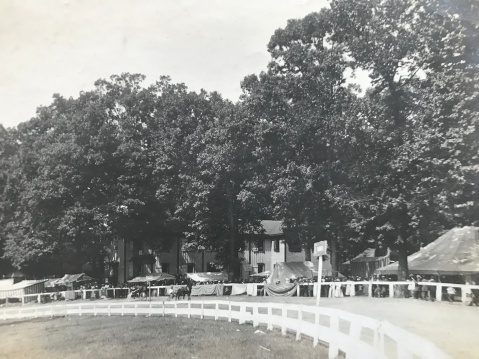 Bend on the harness racetrack, Rockville Fairground circa 1910. Photo by Lewis Reed 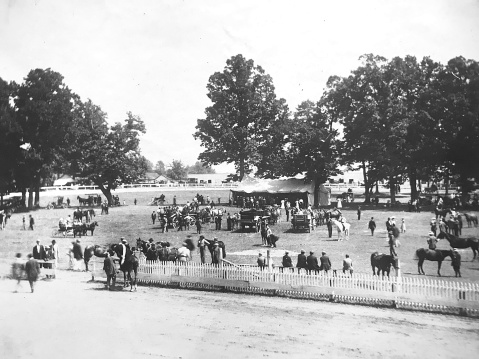 Crowds at the racetrack, Rockville Fair. Photo by Lewis Reed 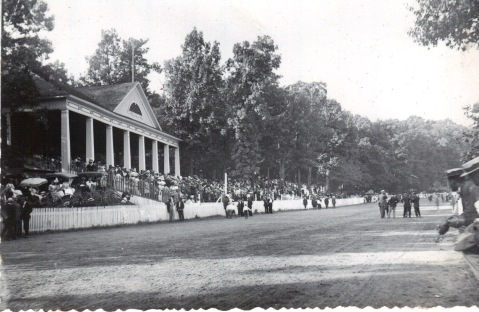 Harness race at the Rockville Fair, circa 1910. Same vantage point as auto race photo below. Photo by Lewis Reed

Harness racing was one of the main attractions, but after the introduction of the automobile in the early 20th century, auto races took over…

The photos below depict auto races at the Rockville fairgrounds. The photo of a harness race above was taken from approximately the same vantage point as the auto race below, which you don’t see very often in pictures from that era. 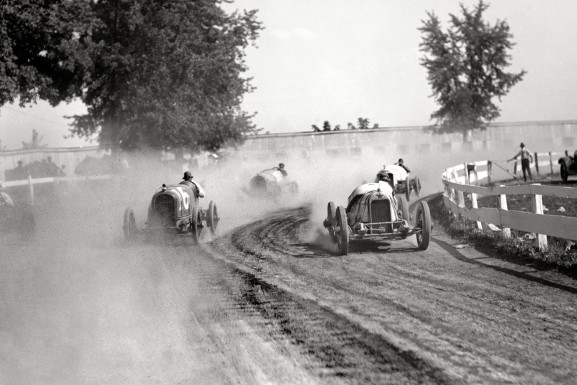 Dusty Action – 1923 photo of the exciting auto races at Rockville Fair. Five racers are just coming around the bend on this dirt track with their tires spinning up dust in their wake. Photo by Lewis Reed

This race car is a total mystery…what on earth is it? It appears to be a two-man race car. Photo by Lewis Reed

Below is a 1923 Washington Post ad for an auto race at the Rockville Fair. 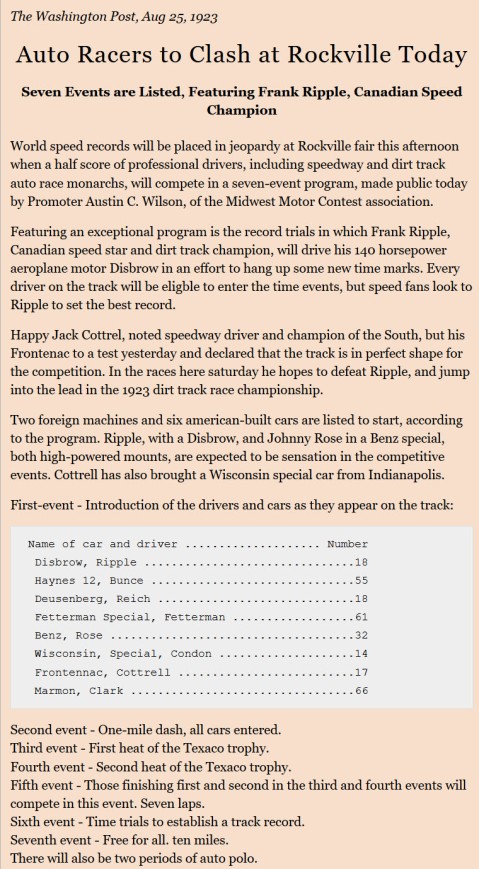 A football field was designed within the oval of the old Fair racetrack in 1946.