This post is a continuation of a series of “Then & Now” images from Lewis Reed’s Photo Collection alongside photographs of how they appear today. Lewis Reed worked hard to preserve a visual history of Montgomery County, Maryland and surrounding area long before automobiles were even around. As early as 1905, he toured on his motorcycle across the states of Maryland, Virginia, and Washington, D.C. and took photographs of many historic locations. Taken approximately 115 years apart, you can see how the Smithsonian Institution Castle looks both the same and completely different from over a century ago.

Smithsonian Institution Castle (THEN): The Smithsonian Institution Building, popularly known as the “Castle,” was designed by architect James Renwick, Jr. Initially, the Castle was intended to be built in white marble and then in yellow sandstone. The architect and the building committee finally agreed on using Seneca red sandstone from the Seneca Quarry, located in Montgomery County, Maryland. When it was completed in 1855, it sat on an isolated piece of land cut off from downtown Washington, DC, by a canal. In the ensuing decades, the Castle became the anchor for the National Mall, as additional museums and government buildings were constructed around it. 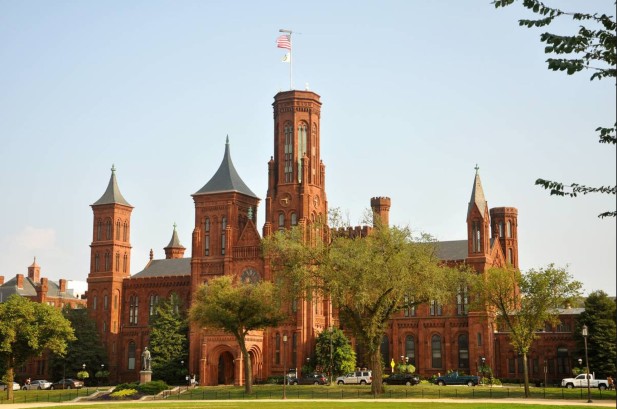 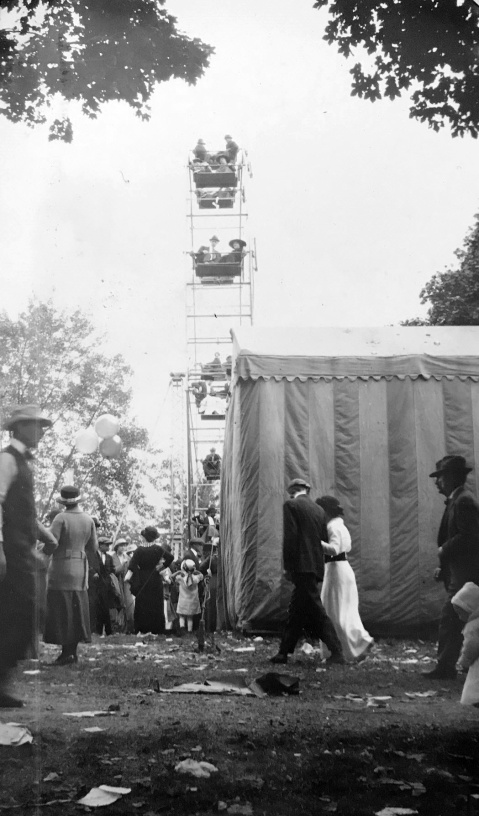 Did you know that February 14th is not only Valentine’s Day, but also National Ferris Wheel Day? This unofficial national holiday is held on this day to honor the birth of the inventor of the Ferris Wheel, George Washington Gale Ferris, Jr. What better way to celebrate Ferris Wheel Day than enjoying this old photograph of the Ferris Wheel taken at the Rockville Fairgrounds, courtesy of Lewis Reed. The fairgrounds were just outside Rockville, about where Richard Montgomery High School is today. The Fair lasted four days, from August 21st to the 24th, and drew visitors from local counties, Washington, and Baltimore.

For the singles and the “enough already with the Valentines”, here is your perfect alternative excuse. Go wish all your friends and family a Happy Ferris Wheel Day!

Baltimore and the surrounding area sure has changed a lot in its centuries-long history. But many traditions and landmarks from decades ago are still around today, give or take a few variations. In this “Then & Now” feature, I have combined one of Lewis Reed’s original photograph’s for “then” and matched it with a corresponding contemporary shot for “now”. In the following photographs, you can see the difference 100 years can make.

So… you’re the inventor of a popular headache remedy living in the city of Baltimore around 1910. You have a factory on Lombard Street, a few blocks from the harbor. You want to create something memorable for the city. Of course, you also want to promote that headache remedy…

What do you do?

If you are Captain Isaac Emerson, inventor of Bromo-Seltzer, you hire a well-known architect and build a massive clock tower next to your factory.

Bromo-Seltzer Tower (THEN): When it was built in 1911, the 15-story Emerson Tower—better known locally as the Bromo-Seltzer Tower—was the tallest building in Baltimore. The tower was inspired by the Palazzo Vecchio in Florence, Italy, and took its name from Captain Isaac Edward Emerson, the inventor of Bromo-Seltzer, a popular cure for headaches and indigestion. Until 1936, the tower was topped by a 51-foot illuminated Bromo-Seltzer bottle that was supposedly visible from twenty miles away. 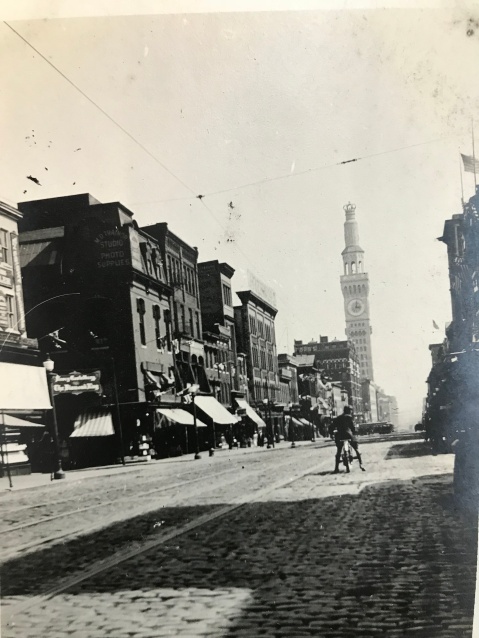 Bromo-Seltzer Tower (NOW): The Bromo Seltzer Arts Tower has been transformed into studio spaces for visual and literary artists. Inside the Tower is the Emerson/Maryland Glass Museum which houses the largest collection of Bromo Seltzer and Maryland Glass bottles in existence. The Emerson Bromo-Seltzer Tower was placed on the National Register of Historic Places in 1973. 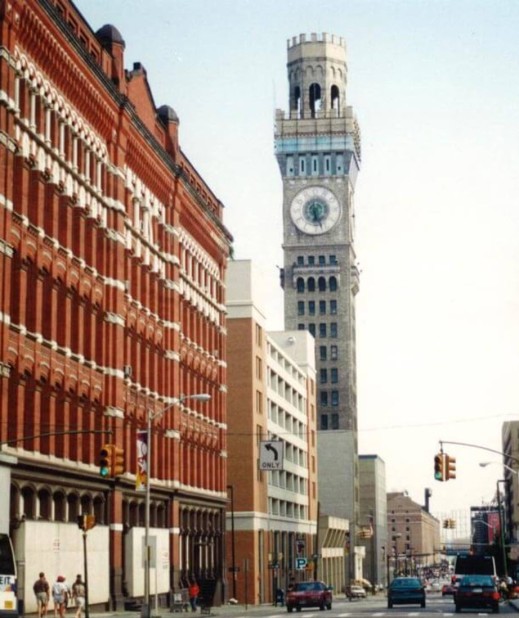 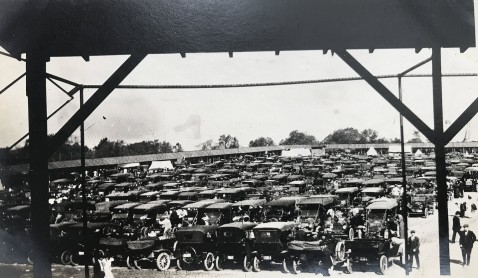 This fascinating scene of hundreds of cars parked in the Frederick Fair parking lot was taken by Lewis Reed in 1914. What is fascinating to me is, with all of these early cars painted in black, how on earth would you find your car in the parking lot?

Can’t find your car, sir? Apparently not a new phenomenon as seen in this 1914 photo of the Great Frederick Fair parking lot, especially since the majority of cars were of only one paint color, your basic black.

This week (September 17-25) marks the 159th edition of the Great Frederick Fair, the largest and greatest county fair in the State of Maryland. There have been many changes since the first fair was held in 1822 when it was known as the Cattle Show and Fair: that was a two-day event, now it’s nine days. The location has changed and so has the name. Today, the Frederick County Fair is officially named the Great Frederick Fair. It’s been held in May, October and November, but now (and for many years) takes place in September — rain or shine.

Fair entertainment has certainly evolved over the years. In 1888, May Lillie, an “expert girl shot with a rifle” from the back of a running mustang, performed. In the early 1900s, acrobatic bears and monkeys, high-wire acts and vaudeville performers took the stage. In 1950, the highlight of the “Irish Horan and the lucky Hell Drivers” show was a “stock convertible catapulted from a giant cannon.” In 1965, it was Jack Kochman’s Hell Drivers performing stunts with cars. 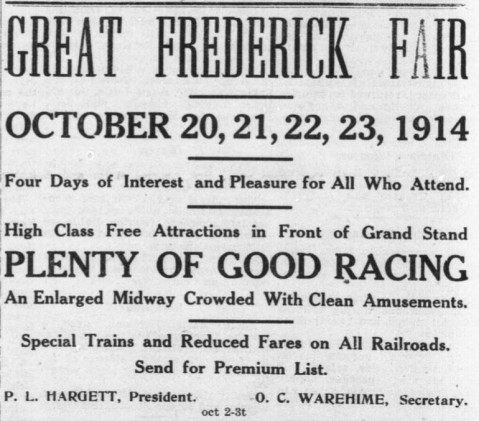 Did you know that February 14th is not only Valentine’s Day, but also Ferris Wheel Day? This unofficial national holiday is held on this day to honor the birth of the inventor of the Ferris Wheel, George Washington Gale Ferris, Jr. What better way to celebrate Ferris Wheel Day than enjoying this old photograph of the Ferris Wheel taken at the Rockville Fairgrounds, courtesy of Lewis Reed. The fairgrounds were just outside Rockville, about where Richard Montgomery High School is today. The Fair lasted four days, from August 21st to the 24th, and drew visitors from local counties, Washington, and Baltimore.

For the singles and the “enough already with the Valentines”, here is your perfect alternative excuse. Go wish all your friends and family a Happy Ferris Wheel Day!