Dodge Made a Car Just for Women 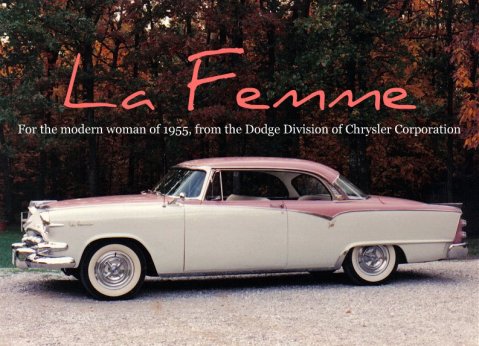 The Dodge La Femme stemmed from Chrysler’s marketing department’s observation that more and more women were taking an interest in automobiles during the 1950s, and that women’s opinions on which color car to buy was becoming part of the decision making process for couples buying an automobile. The La Femme was an attempt to gain a foothold in the women’s automobile market.

Dodge introduced the new La Femme option package in 1955: For $143, you could have the Custom Royal Lancer feminized, with rose paint, gold script, and a nauseating shade of Pepto-pink interior complete with rosebuds.

The accessories which came with the car as standard equipment were where things started getting weird. The car came with a calfskin purse in the same shade of pink as the car’s interior. There was a special compartment behind the passenger seat for this purse, where it could sit with the buckle facing outward. This buckle was large enough for owners to have their name engraved on them, and this is what they were encouraged to do. Inside the purse there was a makeup compact filled with pale pink powder, a lipstick holder, a gold-toned cigarette lighter and case, an imitation tortoiseshell comb, a cigarette lighter, a vanity mirror and silk change purse.

These accessories were all finished in gold-color metal and (you guessed it) pink. For those who wanted them, Dodge also offered an umbrella, boots, a cape (seriously?) and a hat, all matching the seat upholstery.

It went nowhere. La Femme became La Flop. Women stayed away in droves and men weren’t about to be seen driving around in the darling Rosebud. The Dodge La Femme was sold for two years in the U.S. — 1955 and 1956

(Line from a long-lost episode of “Leave it To Beaver”)

“Gee Wally…. all the guys are callin’ me a sissy…. a pink and white car and it says La Femme on the side …. I just can’t be driven to school in mom’s new car anymore …. Yeah, Beave …. I know what ya mean …. that’s why I ride with Eddie …. and besides, mom’s not all that thrilled with the car either!”