Strong as an Ox 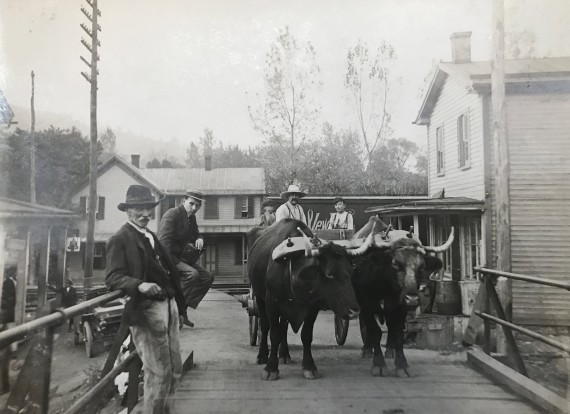 A pair of oxen pull a wagon in Point of Rocks, Maryland. Edgar Reed, second from left is seated on the railing. Photo by Lewis Reed, 1911.

Everyone’s heard the phrase, “as strong as an ox”. Oxen often were used as draft animals in the early 20th century. They supplied much of the power associated with agriculture and were used to haul heavy loads, plow fields, and for carrying goods. A two-animal team usually can manage several tons. Interesting fact: Oxen cost half as much as horses, required half the feed and could be eaten in an emergency.

Point of Rocks has been an important crossroads of travel since American Indians established routes through the region. Though quieter these days, the area was bustling with commerce between the 1830s and 1930s. During the Civil War, troops from both sides frequently crossed the River and the Towpath. Troops traded volleys across the water, skirmished in and near Point of Rocks, and Confederates attacked canal boats and trains, destroyed locks, and raided supply stores. Both the C&O Canal Company and the B&O Railroad reached Point of Rocks by 1832.