Lewis Reed’s love of photography began at a very young age, at a time when most families did not own a camera. The oldest photo in his collection (Fearon’s Pharmacy, pictured below) is dated 1898, which would have made him around 11-12 years old when he started using a camera.

The print below was originally made from Lewis Reed’s glass negatives collection. His full collection dates from about 1898 to 1960, and includes 280 glass negatives and 2500+ photographic prints, the majority of them more than 100 years old. The early 1900s were considered by many to be the golden era of early photography, because of its new availability to the public and somewhat simplified production methods. Many of Lewis Reed’s early photographs are now part of Montgomery History’s photo archives.

The following is an excerpt taken from the Summer 2011 edition of the Montgomery County Historical Society Newsletter.

The Sween Library was recently given a collection of 280 glass plate negatives, showing Montgomery County in the early 20th century. Lewis Reed was a well-known photographer in the county as well as owner (along with his brother Edgar) of Reed Brothers, the Rockville automobile dealership. The collection was donated to the Society by Mr. Reed’s daughter, Mary Jane Reed Gartner.

There are scenes of different areas of the county, buildings, events such as the county fair, and local people. These are a welcomed addition to our growing graphics collection. 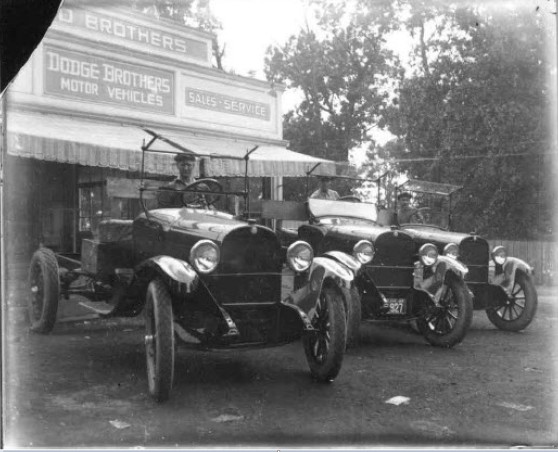 Print made from a Lewis Reed glass negative, showing the Reed Brothers dealership in 1922. On the top left, you can see a crack in the glass.

The photograph below shows Lewis Reed and his family posing in front of a camera set up on a tripod. Lewis Reed is holding a dry glass plate encased inside a holder in his left hand to protect it from the light. Because Lewis used dry plates, he could carry them to locations and expose them, then carry them back to his darkroom to process them. He developed all of his own photographs in a darkroom in his house —  in the kitchen, to be exact — and worked at night to develop the negatives. He likely needed considerable chemical and technical knowledge to develop the plates and print photographs.

On location, once he had identified the subject of the potential photograph, the dry glass plate holder would be inserted into the camera, the cover would be removed from the holder to reveal the negative, the lens cover quickly removed to take the photograph and re-covered, and finally the plate holder cover replaced before it was taken out of the camera. Lewis Reed wrote in pencil on the back of the holder a brief subject description. The image on the negative would then be stored to develop at a later point in a darkroom. 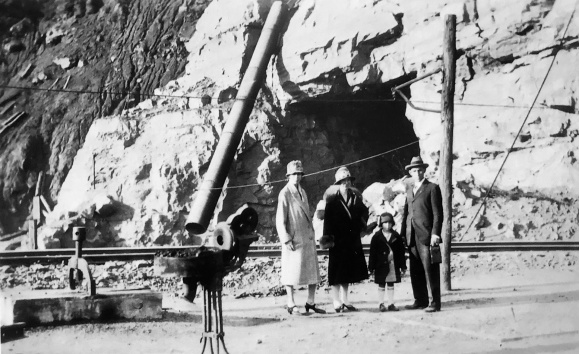 Photography became a lifelong passion for Lewis Reed that expanded in later years to include movies that he made not only of his family, but on his several trips to various parts of the world. The majority of photo prints from his albums were taken during the early part of the 20th century (ca. 1900-1930). His entire collection spans more than six decades and showcases his love for people, automobiles, events, landmarks, and travel throughout the first half of the 20th century.

He had a great eye for composition and seemed to be drawn to historical events and landmark locations, including the Smithsonian, Capitol, Union Station, Old Post Office, Library of Congress, Raleigh Hotel, grading of Massachusetts Ave in DC, and Key Bridge. There are also photographs of many non-Maryland locations including the historic landmark “Lucy the Elephant”, Gettysburg Battlefield/Monuments, Mount Vernon, Pennsylvania Monument and United States Regulars Monuments while under construction, and Quebec Bridge (the 8th Wonder of the World).

If there’s an historical wayside marker on the side of the road in Montgomery County, chances are, one of Lewis Reed’s images is on it. Some of the markers that display his photographs include the Andrew Small Academy Marker in Darnestown, The Origins of Darnestown Marker, Baltimore & Ohio Railroad Station Marker in Gaithersburg, From Trolley to Trail Marker in Bethesda, Clinton A.M.E. Zion Church Marker in Rockville and the 19th Century Crossroads Marker in Darnestown.

Of particular interest is Lewis Reed’s collection of manipulated photographs. He was 100 years ahead of his time by creating special effects to images long before the convenience and efficiency of digital photography and Photoshop were ever imaginable. Lewis Reed used a wide variety of effects, including hand-tinting, double exposure, applied handwork, and creating images that made it look as if there were ghosts in the picture. It’s pretty amazing how his early photography shows such versatility and creativity considering the limited tools that were available at the time.

A double exposure image of Lewis Reed’s brother, Edgar, seated on both sides of a table. Photo by Lewis Reed

In the double exposure photo above, Lewis Reed’s brother, Edgar, is playing cards with himself. The thing to look out for is to see that nothing inanimate in the scene is moved during the time of making the two pictures — in this case, you can tell the angle of the camera changed slightly when Edgar moved to the other side of the table for the second shot.

His photographs comprise a remarkable historic record of Montgomery County life in the early 20th century.