This photograph was marked only “Rockville.” Note that the sidewalks are board planks elevated from street level. Photo by Lewis Reed ca, 1912

What makes Rockville such an interesting place? It’s interesting history! Old photos have an amazing way of showing us what life was like years ago and depicting how our communities once looked. You might not realize how much things have changed until you look back and see what it looked like in the past.

A bit of Rockville history: More than 250 years ago, land grants to European settlers formed the nucleus for today’s Rockville, Maryland. By the 1750s local farmers were transporting tobacco to market in Georgetown down a road formerly used by Indians. The tiny settlement was designated as the seat of the new Montgomery County in 1776. Known as Rockville by 1803, the town’s life centered on Courthouse activity. More homes and shops were built, and the town of nearly 600 was incorporated in 1860. The dynamics that created Rockville in the 18th and 19th centuries are still the same ones attracting newcomers today: the presence of county government, a favorable location close to the nation’s capital, converging transportation routes that bring people here, and identity as an independent municipality.

Take a journey back in time through the lens of Lewis Reed and see what Rockville looked like more than one hundred years ago. As always, click the photos to get a better look.

North side of East Montgomery Avenue near the courthouse, ca. 1914. Note the trolley car on the left. Photo by Lewis Reed 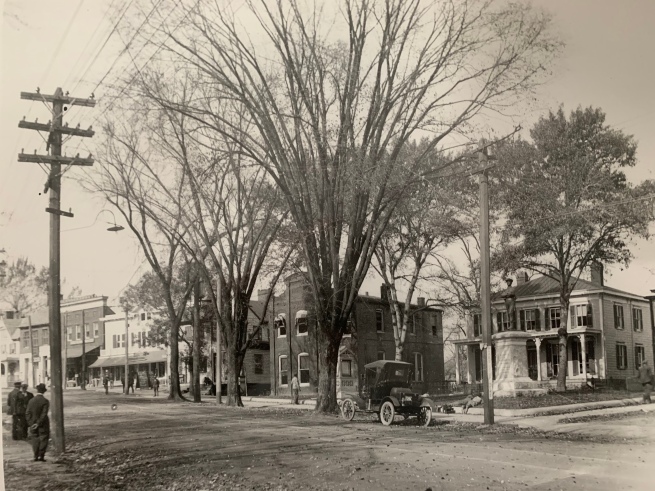 Court House Triangle. The large white house behind the Confederate Statue is the Hicks House.  The Montgomery House Hotel is to the right of the Hicks House, just out of the image. Photo by Lewis Reed, 1914

On September 28, 1917 a draft for World War I began and the first 40 men reported for duty at the Montgomery County Court House in Rockville, Maryland. In the photograph below, cars are parked around the court house during the speech-making in the court room to drafted men. Montgomery County’s first recruits left Rockville by train for Camp Meade, Maryland on this same day. They each received a package of smoking tobacco and a rousing send-off from two thousand people after speeches at the courthouse, dinner at the Montgomery House Hotel, and a parade to the depot. About 160 Rockville men served in the eighteen-month war. One of those men was Rockville resident, Edgar Reed. Edgar was fortunate enough to survive World War I and to settle back in Rockville and enjoy a successful life and career in the automobile business. 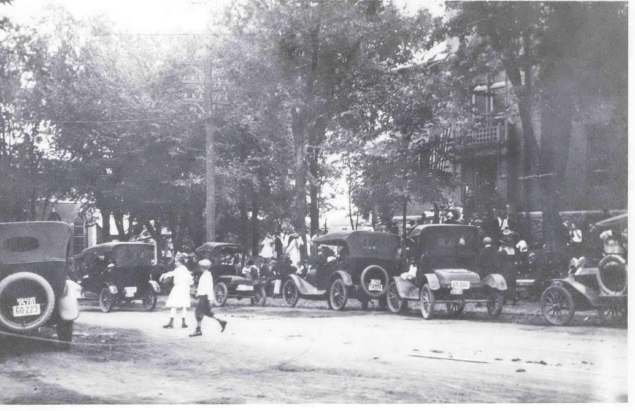 Notice that most of the cars in the above photo have two license plates: at this time, you needed a separate tag to drive a car in the District of Columbia. There is also horse dung in the dirt road (E. Montgomery Avenue), suggesting buggies had been by recently as well. Barely visible in the background left is the Maryland National Bank building, which was demolished during urban renewal in the late 1960s. 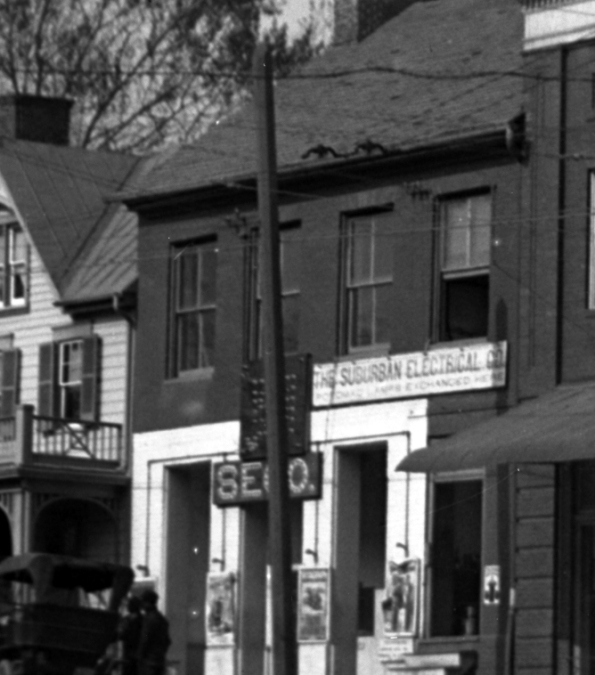 The upper story of this building was the living quarters of Mr and Mrs B. F. Hicks. The building was later acquired by W. Valentine Wilson, who tore it down and replaced is with the “SECO” for Mr Wilson’s Suburban Electric Company. The ground floor was made into a moving picture theater.

Washington Hicks operated this general or dry goods store in Rockville from the late 19th century until 1940. His son W. Guy Hicks continued to run the store until his retirement in the late 1950s. The photo above shows the storefront in 1914.

On a bleak night in February 1921, a pistol shot was fired while others yelled, “Fire!”. From John Collin’s store on East Montgomery Avenue — beloved by local children for Cracker Jacks and penny candy — flames reached toward the sky. Volunteers arrived with buckets while others operated the hose reels and hook and ladder truck. The main street was saved with help from men and equipment of Washington, D.C., but Collins’s store was a smouldering ruin. A few weeks later, fifty concerned townspeople elected officers of the newly formed Rockville Volunteer Fire Department.

Most roads in Montgomery County, even those running  though towns, were dirt. In the photo above, taken in downtown Rockville, a delivery wagon can be seen at the curb, as well as advertisements for Coca-Cola, which would have been a product only 20 years old at that time, having been invented and trademarked in 1887. Trolley tracks bisect Montgomery Avenue. Today, the view down this street ends with stairs to the pedestrian overpass, which leads over Hungerford Drive into the Rockville Metro Station.

The drugstore was built in the 1880s and was run by Robert William “Doc” Vinson from 1900 until his death in 1958. The drugstore was also a popular gathering place for city politicians, and that President Woodrow Wilson once personally traveled there to buy Wolfhound tablets. The building was torn down in 1962, and replaced with an office building during Rockville’s “urban renewal”.

Rockville Town Hall was incorporated in 1881 to “improve the educational, moral, scientific, literary and social condition of the community. Stock sold at ten dollars per share raised most of the six thousand dollars needed to erect a handsome two-story brick building on Montgomery Avenue. The Town Hall opened on Tuesday evening, July 18,1882. For the next half century, the Town Hall operated as a small-town cultural center, with a four hundred-seat auditorium on the second floor, a stage, balcony, and dressing rooms, a ticket office on the lower level and seven leased offices. The community used the facility for visiting lectures, theatrical and musical performances, dances, and other suitable “instruction and amusement”.

For most of Montgomery County’s history, a single building, familiarly known as “The Courthouse,” served all functions of local government. The Red Brick Courthouse is the county’s third on this site, constructed in 1891 at a cost of $50,000. Roads were crude, daily trains connected county commuters and farmers with the nation’s capital, and trolley tracks were planned between Rockville and Georgetown. The county’s 27,185 residents visited the courthouse as litigants and jurors, to pay taxes, buy dog tags, probate wills, obtain marriage and business licenses, record deeds, speak to County Commissioners, and request law enforcement from the Sheriff. Designated a historic building on July 19, 1965 by the Montgomery County Historical Society.

Founded in 1813, historic St. Mary’s Church led the way for Catholics in Montgomery County. The cemetery in front of the chapel is the final resting place of literary legend F. Scott Fitzgerald and his wife Zelda.

Rockville: Portrait of a City by Eileen S. McGuckian