Photo Manipulation Without a Computer

If you take a look at the state of photography today, such as the advances of digital cameras and the artful image manipulation by Photoshop, it is easy to forget that back in the 1900s photographers couldn’t just go into a computer program and change their images any way they wanted. Instead of retouching an image on a computer, as it’s done now, it originally took place on the negative.

Photo manipulation was one tool Lewis Reed had in his photography tool belt. He was 100 years ahead of his time by creating special effects to images long before the convenience and efficiency of digital photography and Photoshop were ever imaginable.

I was hugely interested in how this was undertaken, and by the fact that the modification looked so seamless in the printed image. Spotting these manipulated photos in his extensive collection has been both easy and difficult. Some were simple double exposure images or hand colored images. The addition of these hand-drawn backgrounds was a little more difficult. It wasn’t until I viewed the high resolution scan that this modification jumped out at me.

Reading up on the subject I have become aware that retouching is in fact an art that evolved right alongside the birth of photography. The photographs below were retouched by hand (also known as “handwork”) on the glass negative using a hard graphite pencil and pieced together in the darkroom from separate photographs. The two photographs, one of the people standing on the edge of a cliff, and the other of the hand-drawn mountains, appear to be joined at the edge of the cliff where the mountains begin. All of this required a degree of artistic skill and access to a darkroom. Lewis Reed developed his own photographs in a darkroom in his house — in the kitchen, to be exact — and worked at night to develop the negatives.

The photographs below show two unknown people posing on a cliff in front of a hand-drawn background of mountains. 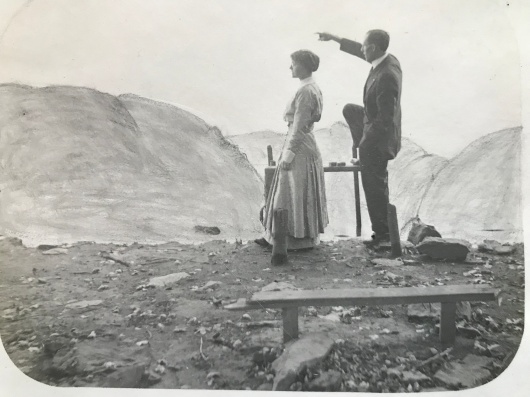 An original photograph retouched with hand-drawn mountains by Lewis Reed

Same photo as above, different angle, retouched by Lewis Reed.

Today, we can look back and appreciate the time and creativity it took to edit these photos without Photoshop.