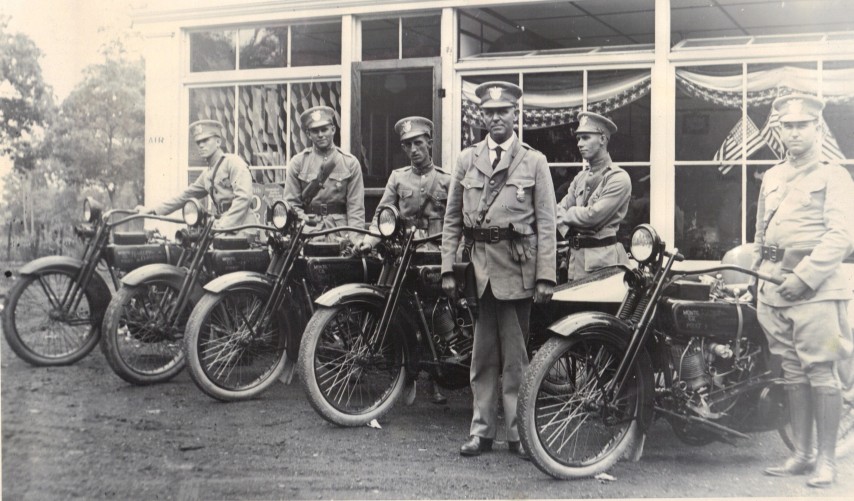 Today marks the 242nd anniversary of the birth of our nation and the 96th anniversary of the beginning of the Montgomery County Police Department. Cattle rustling, bootlegging and stealing poultry were among the most common crimes when Montgomery County hired its first police chief and five officers in July 1922. So widespread was the theft of chickens and turkeys that some residents employed a homespun form of crime prevention by cutting off a specific claw on their birds to identify them. “Officers knew who all the chicken thieves were,” said one historical account of the era put together by the police department, “and upon getting a report of missing Rhode Island Reds, or some other breed, would head straight for the thieves’ hideaway to try to catch them ‘red handed’ before the birds got to the frying pan.”

Posing in front of Reed Brothers Dodge on July 4, 1922 Chief Charles Cooley, center, and his men of the first mounted unit of the Montgomery County Police Force, were on their first day of duty. For several years, since there was no police station, the officers would meet for “roll call” on the steps of the Red Brick Courthouse in Rockville at 2:00 p.m. every day to let each other know they were alive and well. Chief Cooley was given the privilege of a Model T Ford. The chief was paid $1,800 a year (the chief now gets $112,564) while the officers got $1,500. Each of the officers was issued a Harley-Davidson motorcycle, a .38 Smith & Wesson handgun, a black jack, law book and was allotted $300.00 a year for the upkeep of their motorcycle. Jones patrolled Silver Spring, Rodgers the Bethesda-Chevy Chase area and Burdine, Clagett and Gaither the Upper County areas.

The county’s population in the early 1920s was just 35,000 (it’s now more than 800,000). Much of the county was farmland, which accounted for the thefts of livestock. It also was the Prohibition era, when bootlegging and moonshine still factored routinely on an officer’s shift.

The officers worked 14 hours at night, 10 hours in the day, with two days off every two weeks. But they were on call at all times. Since there was no mobile radio contact (the first one-way radio system was installed in cars in the early 1930s), the officers tended to hang around the courthouse or a local firehouse that had a phone.

One of the officers came up with the idea of placing a flashing red beacon light on a pole atop the Rockville courthouse. When flashing, it would alert police that they had a call or were wanted at the office. In 1927, similar lights were used at district stations in Silver Spring and Bethesda.

Congratulations MCPD and thank you for your many years of service!