You might not realize how much Washington DC has changed until you look back and see what it looked like in the past. I thought it would be fun to revisit an historic location using one of Lewis Reed’s original photographs for “then” and a stock image from today for “now” to see what differences are visible. In the following photographs, you can see how the United States Capitol looks both the same and completely different from a century ago.

U.S. Capitol (THEN): Seen in the black & white photograph taken by Lewis Reed in 1910, is the United States Capitol in Washington, DC. Visible in both photos is the white marble Peace Monument that stands in the circle to the west of the U.S. Capitol at Pennsylvania Avenue and First Street, NW. A streetcar can also be seen in the black & white photo. The Pennsylvania Ave streetcar line ran from Georgetown, across Pennsylvania Avenue, past the White House, up to Capitol Hill, and then down to the Navy Yard. With no stop signs, speed limits, or lane lines, the streets of the early 1900s were completely different. 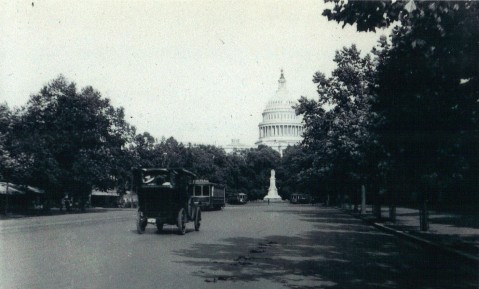 U.S. Capitol as seen from Pennsylvania Ave in 1910. Photo by Lewis Reed

U.S. Capitol (NOW): The same view over a century later hasn’t changed much… except for the traffic and Segway riders with fanny packs.

On Pennsylvania Ave and U.S. Capitol building today. A Segway tour is stopped along the bike lanes.