One of the deadliest tornadoes in American history hit Gainesville, Georgia on April 6, 1936. And Lewis Reed was there to capture the aftermath. On the 86th anniversary of this epic tornado, I have posted eleven original snippets of history that Lewis Reed captured through the lens of his camera that day.

It all started as part of a storm system that hit Tupelo, Mississippi on April 5th, 1936. The Tupelo tornado, which registered as an F5 on the Fujita Scale, emerged from a complex system of storm cells and created a monster soon known as the fourth-deadliest tornado in U.S. history. It tore through houses, killed entire families and was even said to have left pine needles embedded into trunks of trees. One of the survivors of that storm in Tupelo was none other than a one-year-old Elvis Presley.

Unfortunately, the tragedy of that storm didn’t stop there. The system moved east overnight.

Take a look at some of the sobering aftermath photos of the deadliest tornado to ever hit Georgia … through the lens of Lewis Reed. As always, click the photos to get a better look. 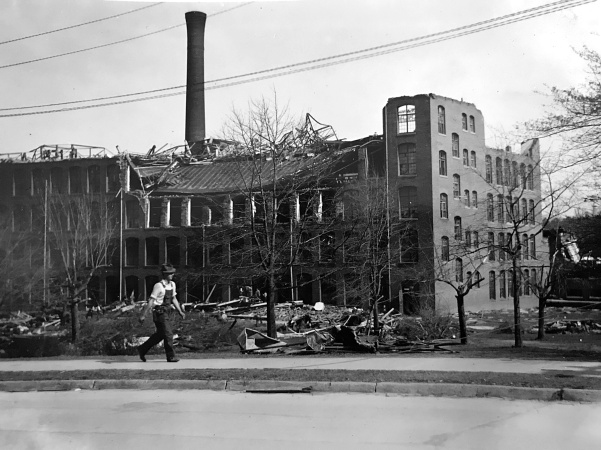 View of part of the damage done to the Pacolet Manufacturing Company when a tornado struck the area. This textile mill had been established in 1901. New Holland was a community located just north of Gainesville. Photo by Lewis Reed

The devastating tornado continued beyond Gainesville, next striking New Holland, about two miles to the east, where it heavily damaged the massive Pacolet Mill, a major producer of textiles (as well as nearly 100 homes). The Digital Library of Georgia states that the Pacolet Mill was heavily damaged. Remarkably, no one in the mill was injured, as the workers saw the storm coming and evacuated from the upper floors, then ran to the building’s northeast end which remained intact after the tornado struck. (They knew where to take refuge as a result of an earlier tornado which struck in 1903, killing about 50 people in the mill.) After extensive repairs, Pacolet Mill resumed operation. 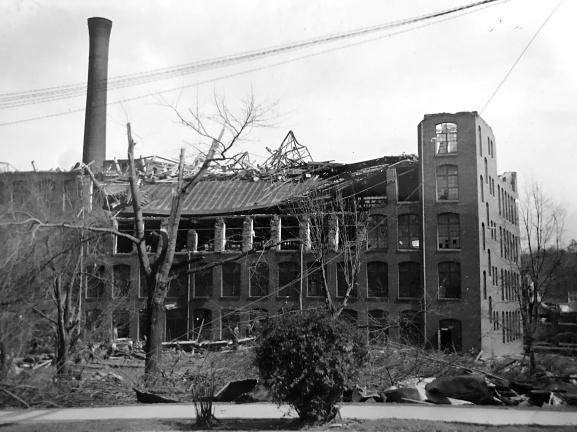 Another view of Pacolet Mill. Photo by Lewis Reed

The overall destruction was barely able to be tallied. Department stores collapsed killing dozens of people, residential areas were devastated with nearly 750 homes destroyed and more than 250 were badly damaged. Buildings caught fire, trapping people inside. It was even reported that the winds were so high that letters from Gainesville were blown almost 70 miles away and found in Anderson, South Carolina. 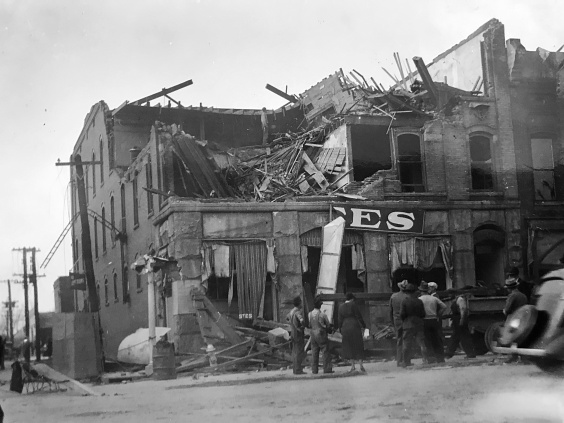 A man stands on second floor piles of rubble amidst the ruins of a demolished business. Only a few partial walls and floors were able to withstand the tornado strike. Photo by Lewis Reed 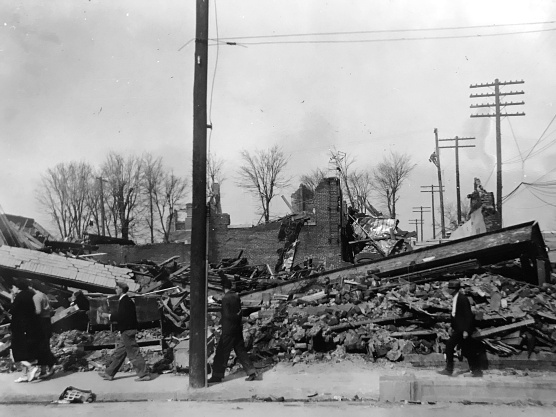 Stunned survivors survey what’s left of their town in this view of the widespread damage in the city streets. Photo by Lewis Reed 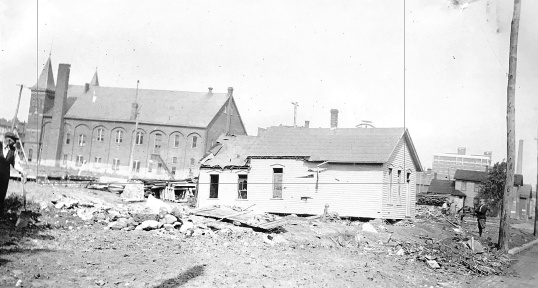 A man stands by piles of rubble amidst the ruins of a house. Photo by Lewis Reed 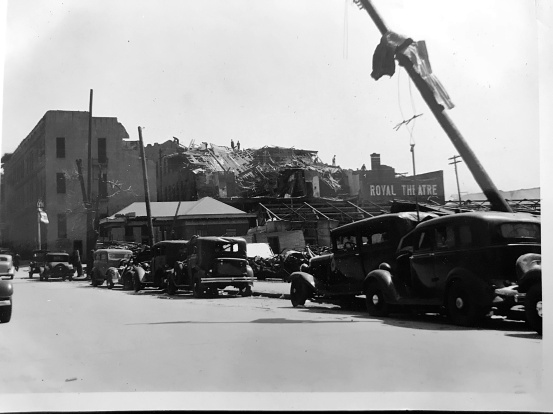 The storm that struck with ‘lightning swiftness’ hit the Royal Theatre straight on, also doing major damage to train cars and train tracks running through town. Utility poles were blown over and hung with twisted metal. Photo by Lewis Reed. 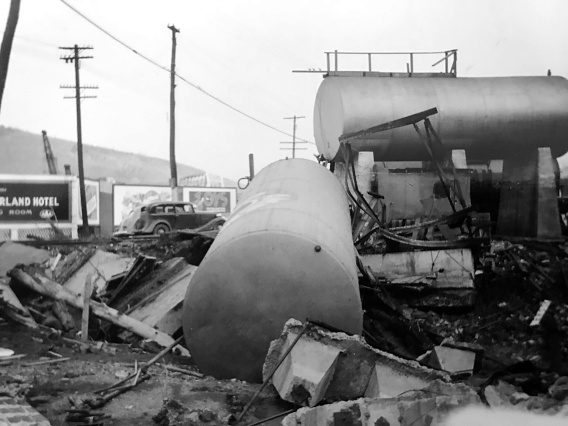 This photo documents the power of the tornado to toss around even massive railroad cars. Photo by Lewis Reed 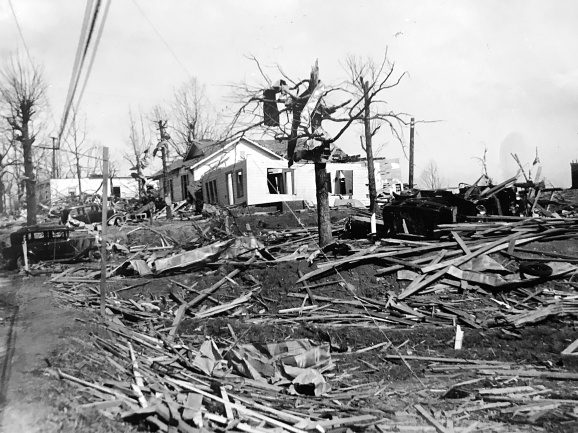 Shambles of homes struck by the tornado. The twister stripped trees of their leaves and left branches hung with twisted metal. Photo by Lewis Reed. 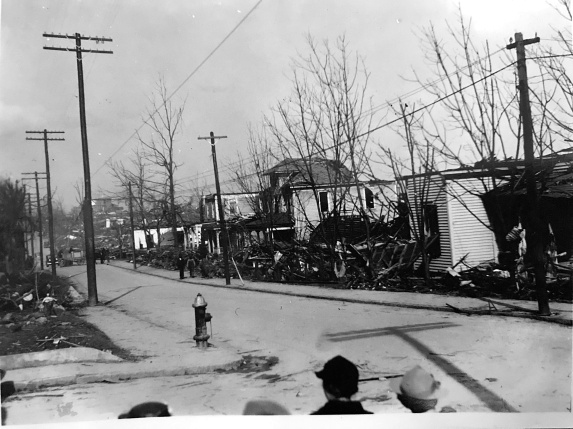 Eight to ten feet of debris piled up along a street while a few houses remain erect despite having sustained damage. Photo by Lewis Reed 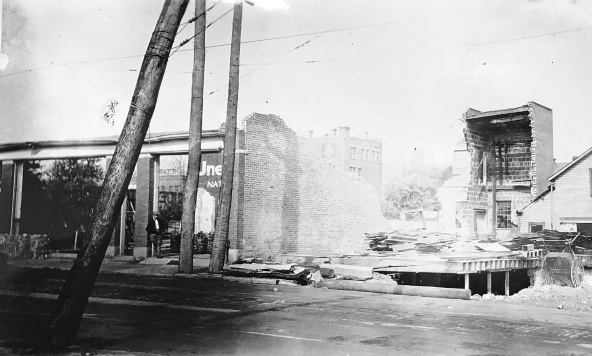 Many of the businesses experienced extensive damage. Some stores later offered “tornado sales” to dispose of the damaged goods. Photo by Lewis Reed 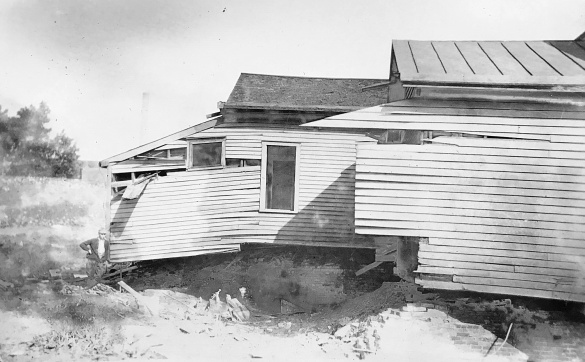 House leaning at a precarious tilt after having apparently been moved from its foundation. Photo by Lewis Reed

The death toll in Gainesville was officially 203, though some accounts place it higher. Property damage was in excess of $13 million dollars, or what would be $1.3 billion in damage by today’s standards. More than 1,600 persons were injured and more than 750 homes were damaged or destroyed. The storm that hit Gainesville on April 6, 1936 remains the fifth deadliest tornado in U.S. history. President Franklin Roosevelt toured the city three days later, and returned in 1938 to rededicate the courthouse and city hall after a massive citywide rebuilding effort.

2 responses to “The 5th Deadliest Tornado in American History (Aftermath)”