Take a step back in time with this glimpse into an almost forgotten era of Montgomery County history in the early 20th century… the motorcycle era.

Motorcycle clubs began forming in the early 1900s as manufacturers stressed the social, sporting, and healthy outdoors potential of the motorcycle. Both Lewis and Edgar Reed, along with brother-in-law Bernard Hanshew, began their riding adventures with a group of friends from the Park Avenue community in Rockville in the early 1900s.

Historically, riding motorized bikes, like horses, began as a gentleman’s sport. In the early days of motorcycling, propriety dictated that a gentleman be presentable when he went out for a spin. Full-length boots derived from horseback riding and a sporty cap with goggles were adapted to the new pursuit of motorcycle riding.

Edgar Reed (rider second from left) and Lewis Reed standing behind him (others unidentified). On Park Avenue, ca. 1912

Early motorcyclists were often pictured in riding groups. From its beginnings, motorcycling developed very much as a social activity. Gentlemen of the day often used it to spice up their sunny weekends and impress ladies.

The Reed motorcycle gang on Rt 118 in Darnestown. 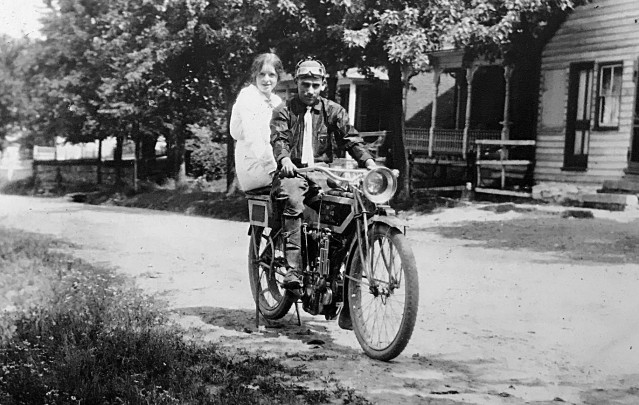 Edgar Reed and an unidentified lady on an Excelsior motorcycle.

Left – right: Lewis Reed with camera, Edgar Reed, Bernard Hanshew. The photo was taken 1914 in Harper’s Ferry, West Virginia. The wooden frame Victorian-style train station dating from 1889 can be seen in the background. 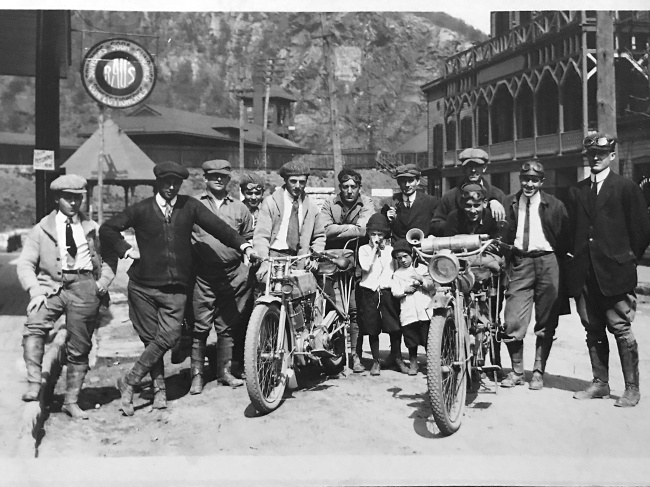 Adventurers, enthusiasts, friends, and family… these are the pioneers of Montgomery County who made riding a social pastime, which has carried on in motorcycle travel today. Ultimately, for adventurous spirits exploring rural Maryland in the 1910s, the motorcycle meant freedom. Many of Lewis Reed’s photographs would not exist without it.