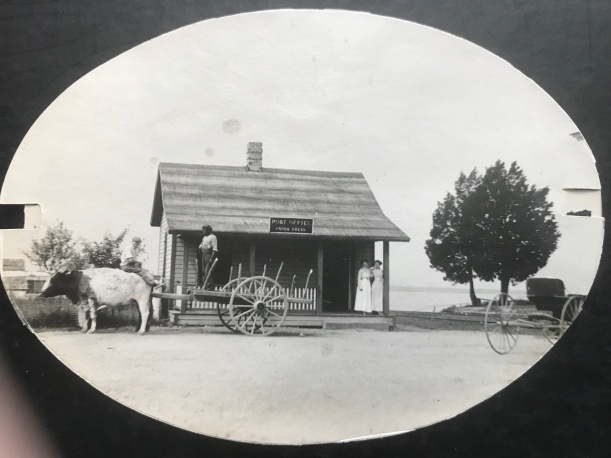 It’s hard to imagine a world without cars, buses, and trucks. But put yourself back in the early 20th century. Before the invention of trains and automobiles, animal power was the main form of travel. Horses, donkeys, and oxen pulled wagons, coaches, and buggies. Early settlers often used oxen to pull their big wagons. Oxen were slower than horses, but they could pull four times as much weight.

In this circa 1910 photograph taken by Lewis Reed, two men pose with an ox-drawn wagon in front of the little Popes Creek Post Office on the Potomac River. Two elegantly dressed women with hats stand outside on the porch. Note the two-person horse buggy on the right. The Potomac River is visible in the background. The Popes Creek Post Office probably served as a social gathering place for the community.

A bit of history: Popes Creek is an unincorporated community in Charles County, Maryland. It is located on the shore of a north-south section of the Potomac River north of and in sight of the Harry Nice Memorial Bridge. To the north is Port Tobacco Village, Maryland, and to the southeast the Cobb Island peninsula. Pope’s Creek has a long and varied history. Near here, John Wilkes Booth was rowed across the river, a week after he assassinated President Abraham Lincoln. The creek itself was named for Nathaniel Pope, an early landowner in the area.