In anticipation of Halloween, I thought it would be fun to feature a photograph that Lewis Reed took of Saylorsburg Lake House Hotel, now the site of Hotel of Horror.  The old Lake House Hotel, depicted in the photo above taken by Lewis Reed in 1915, was once a vibrant Poconos retreat and a popular hotel for tourists. According to local folklore, during World War II, many of the employees at the Lake House were called to assist in the Pennsylvania National Guard, leaving the local asylum with one lone security guard to watch over the entire building. The inmates escaped, made their way to the hotel and took it over. The insane patients performed experiments on the guests. What was once a renowned resort for the rich and famous, shown here in 2001, became a torture chamber. 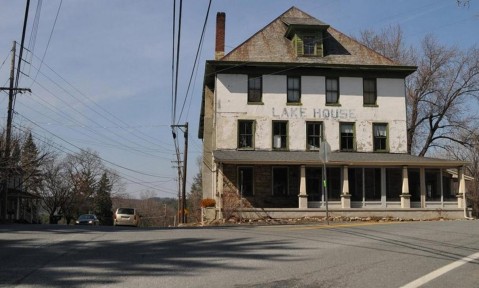 The Lake House Hotel in Saylorsburg, site of Hotel of Horror, 2001

Today it’s the site of the Hotel of Horror, a haunted-house attraction open during the Halloween season.

Happy Halloween to all the readers of this blog!