Motorcycles have evolved in countless ways since their emergence near the beginning of the 20th century. In the early years of the 20th century, motorcycles and automobiles were competing for the same audience. Most people traveled either on or behind a horse, while the more adventurous were fascinated by those new-fangled bicycle things. So anything with a motor represented a giant step forward.

Take a step back in time with this glimpse into an almost forgotten era of Montgomery County history in the early 20th century… the motorcycle era. These photographs taken by Lewis Reed span a period from roughly the early 1900s up until about the late 1920s.

Lewis Reed sitting on his Harley Davidson circa 1915 somewhere outside Frederick, Maryland.

Lewis Reed was not only passionate about automobiles, he also enjoyed riding motorcycles. At the turn of the century, before cars were even around, Lewis Reed traveled up and down the East Coast on his motorcycle with his brother, Edgar, and a group of friends. In the early days of motorcycling, propriety dictated that a gentleman be presentable when he went out for a spin, and since tweed suits were the standard countryside uniform of the the late-nineteenth century, so it was for motorcyclists as well. Jodhpurs and full-length boots derived from horseback riding and jackets with a cut consistent with hunting and other kinds of sports were adapted to the new pursuit of motorcycle riding.

Above, Lewis Reed stands with his camera at far left. The photo was taken 1914 in Harper’s Ferry, West Virginia. The wooden frame Victorian-style train station dating from 1889 can be seen in the background.

This photograph is the first known photograph of the entire Montgomery County Police Force. Photo taken by Lewis Reed on July 4, 1922.

By the early 1920’s, the motorcycle had proven itself to be a rugged, reliable, and economical means of transportation. No one benefited from this more than law enforcement agencies. State and local police departments quickly adopted the new machines into their arsenal, allowing patrolmen to more skillfully navigate city streets and venture farther into rural areas.

Posing in front of Reed Brothers Dodge on July 4, 1922 Chief Charles Cooley, center, and his men of the first mounted unit of the Montgomery County Police Force, were on their first day of duty. For several years, since there was no police station, the officers would meet for “roll call” on the steps of the Red Brick Courthouse in Rockville at 2:00 p.m. every day to let each other know they were alive and well. Chief Cooley was given the privilege of a Model T Ford. The chief was paid $1,800 a year (the chief now gets $112,564) while the officers got $1,500. Each of the officers was issued a Harley-Davidson motorcycle, a .38 Smith & Wesson handgun, a black jack, law book and was allotted $300.00 a year for the upkeep of their motorcycle.

Have you ever come across a picture that you had to look at twice just to make sure you were not crazy? Well I have… and the photo above is one of them. When I came across this photograph in Lewis Reed’s album, I had to look at it several times to make sure I was not “seeing things”. There is something surprising in this photograph, and when I finally figured out what it was, it put a big smile on my face.

Can you spot the unusual object in this photo? 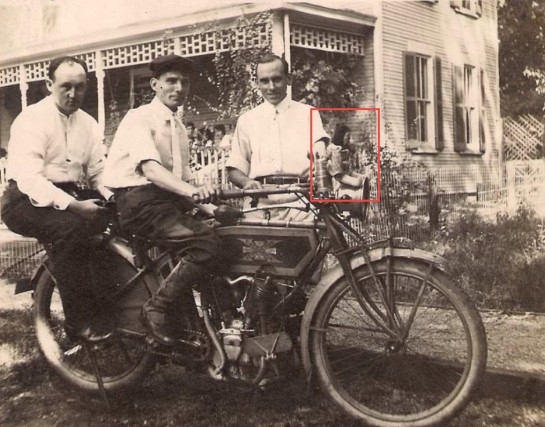 Once motorcycles were established in the marketplace, various accessory items were developed to accommodate a larger audience for the product. The sidecar, a one-wheeled passenger compartment that was attached to the main frame of the motorcycle, was perhaps the most visible accessory. The sidecar expanded the number of passengers that could be driven and also improved the stability of the vehicle.

This is a photograph taken by Lewis Reed of an Indian motorcycle with his brother, Edgar, seated in the sidecar. From what I’ve been able to research, I believe it’s a 1914 Indian. The handle bars on a 1913 had no cross bar, the 1914 model had a cross bar that can be seen on this one. The tool box was mounted on the rear of the carrier in 1913 and moved to the top of the fuel tank in 1914.

Riders wore gauntlet gloves along with their full-length boots to keep the wind out, as well as provide a little extra skin protection should they go down. A less protective addition to the motorcycling wardrobe was the flat cap.

A motorcycle racer rips down an unknown racetrack kicking up dust in his wake. Photo by Lewis Reed, ca. 1915

Lewis Reed Captures the Thrill of Motorcycle Racing in 1915

In the first years of the twentieth century, companies like Harley-Davidson and Indian began producing motorcycles for the general public. Although there is not an exact date of the first motorcycle race, you can be sure that as soon as there were two motorcycles on the road, there was racing. As more and more motorcycle manufactures started popping up across the U.S., motorcycle racing started making it’s way to more official venues. The earliest races were held on fairground dirt tracks used for horse racing. On short tracks, typical of county fairs, the most valuable driving technique involved the infamous “pendulum skid,” with riders taking the curves much as automobile drifters do today (but with two wheels fewer, to add to the excitement).

The photograph above taken by Lewis Reed shows an unknown racer at a fairground raceway in the early 1900s. In the teens, motorcycle racing on dirt tracks throughout the country, was one of the most popular spectator sports. Despite the danger to both racers and spectators, the motorcycle races became very popular and drew large crowds of spectators. Motorcycle racing continued until just after World War 1, when the focus shifted to automobile racing.

Unknown lady and toddler posing on a 1913-1914 Excelsior motorcycle. Photo by Lewis Reed

Back in the early part of the last century when the motorcycle was still new and a novelty, it was often used for Kodak moments. In the photo above, the toddler’s sporty little cap and goggles make the image. Just imagine how excited she must have been to sit on that big machine. The motorcycle seems to be well equipped with extras including: a headlamp, a handlebar-mounted Klaxon horn, and a well padded passenger seat on the back.

Motorcyclists in front of Greenawalt Drug Store in Frederick, Maryland. Photo by Lewis Reed, circa 1915

Things look pretty quiet in front of Greenawalt Drug Store on Market Street in Frederick, Maryland on this day some 100 years ago. In the early days, motorcyclists were more likely to wear a tie and sporty little cap than the leather of today. 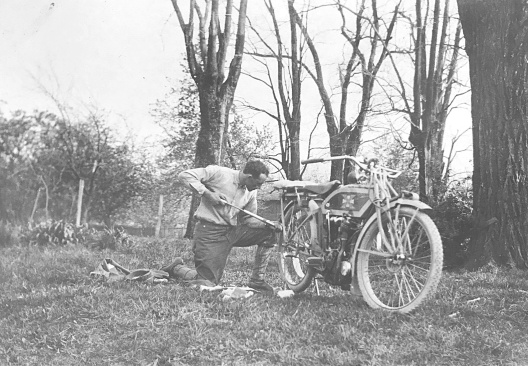 Lewis Reed is airing up the rear tire of his Harley Davidson with an old-style hand pump, 1915.

Motorcycle repair shops were nearly nonexistent in the early 1900s, so many motorcyclists had to learn to fix their own machines wherever they broke down. Early motorcycles carried a tool box mounted on the rear luggage carrier, or on the top of the fuel tank. Hand air pumps were also carried in case the rider had a flat tire along the way.

Repairing a flat tire on the side of the road. Photo by Lewis Reed

If you look closely at this photo, you can see bicycle pedals on the motorcycle. Most early motorcycles were equipped with pedals so that an unlucky rider with a failed engine could still get home. They were also handy for getting a little extra uphill push and for starting the machine.

The early days of motorcycle riding was an expensive joy and pursued mostly by wealthy men. Instead of having a motorcycle as a source of transportation, gentlemen of the days oftentimes used it to spice up their sunny weekends and impress ladies. Outfit relevance dictated a gentleman to be presentable and neat, so when going for a spin, Edgar Reed is wearing a leather jacket, full-length boots, necktie and sporty cap with goggles. 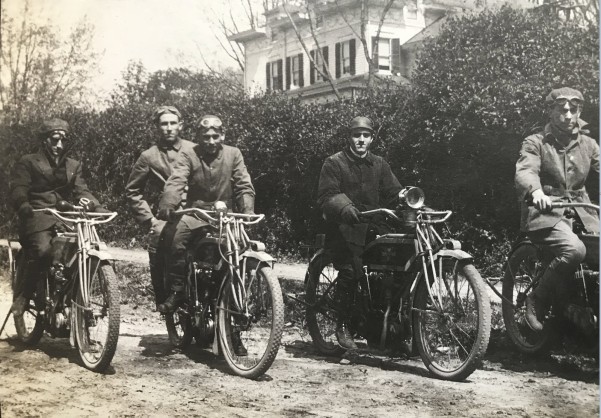 Edgar Reed (rider second from left) and Lewis Reed standing behind him (others unidentified). On Park Street in Rockville, ca. 1912

Early motorcyclists were often pictured in riding groups. From its beginnings, motorcycling developed very much as a social activity. Lewis and Edgar Reed, along with brother-in-law Bernard Hanshew, began their riding adventures with a group of friends from the Park Avenue community in Rockville in the early 1900s. 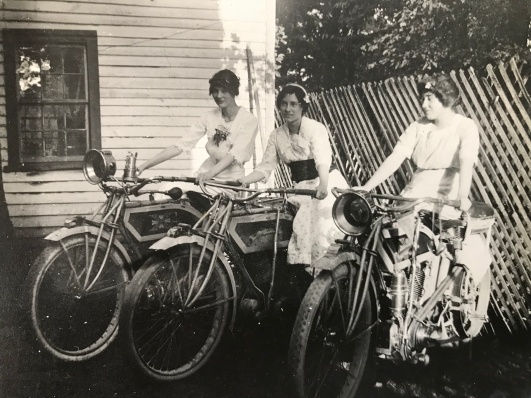 Eleanora Reed, and Lewis Reed’s sisters Geneva and Eva posing on Excelsior motorcycles, 1912. (Note they are all sitting “side-saddle” as true ladies of the time would have been expected to do). Photo by Lewis Reed

While women have been enthusiastic bikers ever since motorcycles were invented, they have had to push back against deeply ingrained attitudes. Women in the first half of the 20th century were expected to dress fashionably and conservatively, and above all, remain ladylike. Sitting astride a motorcycle was considered uncouth: the same as riding a horse with a leg on each side.

Adventurers, enthusiasts, friends, and family… these are the pioneers of Montgomery County who made riding a social pastime, which has carried on in motorcycle travel today.