Fire protection has been a recognized need in Montgomery County since the early 1800s, although there were not any formal organized volunteer or career fire departments until almost 100 years later.

Organization began to take place in Gaithersburg in the late 1880s as the town grew in response to the coming of the railroad and by September 1892, the town wanted a more formal fire organization. Six citizens were appointed to find a way and the means to organize a volunteer fire department, which they did immediately. A month later, the Volunteer Fire Company of Gaithersburg was responding to fires. There were, of course, no firehouses that housed on-duty firefighters of scheduled shifts for volunteers, and when the alarm rang all volunteers would come running. Eden Selby, who was the town barber around 1900, would drop what he was doing when he heard the church bells ring and run to duty, which would often leave customers with unique hairstyles unless they chose to wait in the chair for him to return. During the 1920s, fires destroyed much of Gaithersburg’s downtown – the Post Office, Etchison’s Store, Brewer’s Real Estate offices and Thomas Hardware, Feed and Fertilizer – and in 1928 the present Gaithersburg-Washington Grove Fire Department was created by charter. 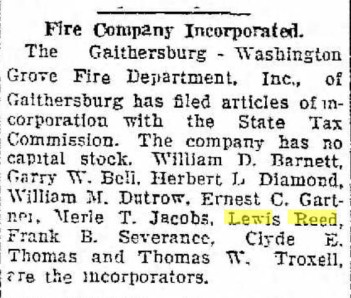 I was doing some online research and stumbled upon the Kensington (Maryland) Volunteer Fire Department’s web page. Their history is quite amazing, actually. Especially when I realized that their first truck was purchased from Reed Brothers Dodge. It was not a complete truck when purchased, however.

1922 was the birth of the Kensington Volunteer Fire Department. With little money, a Dodge truck was purchased from Reed Brothers Dodge in Rockville. A custom fire body was then built and fitted on the truck by Jacobs Brothers in Gaithersburg who ran the Wheelwright Shop on East Diamond Avenue. To raise money, the volunteers held carnivals. The Fire Department incorporated in 1925, and two years later moved into a permanent home in the basement of the National Guard Armory.

Gaithersburg-Washington Grove Volunteer Fire Department Past Presidents and Past Chiefs

In 1967, the first career fire fighters joined the department. Today, the brave volunteers, career fire fighters and emergency medical personnel of the Gaithersburg-Washington Grove Fire Department continue in the courageous footsteps of their noble predecessors as they heroically serve our community.