Come away with me, Lucille: In my merry Oldsmobile: Down the road of life we’ll fly: Automo-bubbling, you and I…. 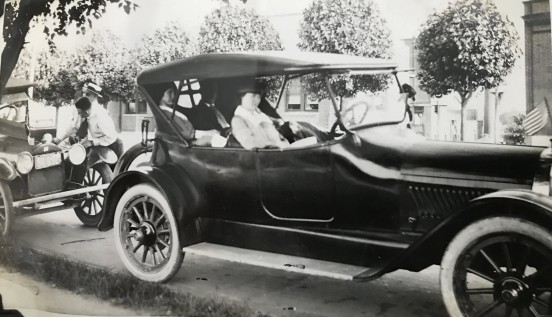 Ethelene Thomas Reed, who married Lewis Reed in 1921, is sitting in passenger seat of a circa 1918 Oldsmobile Club Roadster and her sister, Celeste Thomas Brown, is sitting behind her in the back seat. Photo by Lewis Reed

One of the things I enjoy doing is looking through all of the old photographs in my grandfather’s albums and trying to figure out who and what they are. I came across these two photographs and recognized the passengers, so thought it would be fun to try and identify the car, so I went on a quest. After spending some time viewing images of four brands of cars of the period with a similar appearance, I found it looks a lot like the two-door, four-passenger 1918 Oldsmobile Club Roadster pictured below. Looks the same to me. What do you think? 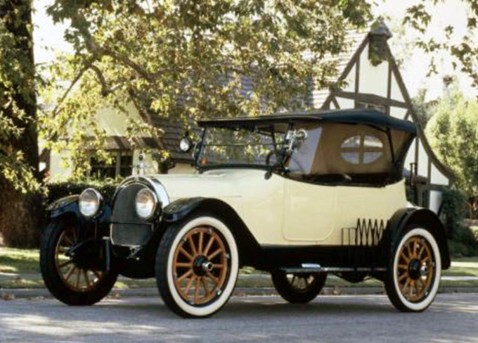 Back in the early part of the last century when the automobile was still new and a novelty, it was often used for Kodak moments. Both old photographs show the same two young women posing in them – one is my grandmother,  Ethelene Reed, who married Lewis Reed in June 1921, and the other is her sister, Celeste Thomas Brown.

Vehicles from that era are fascinating and are often photographed with equally fascinating surroundings. I wonder what the two dapper young men were repairing on the car in the top photo? 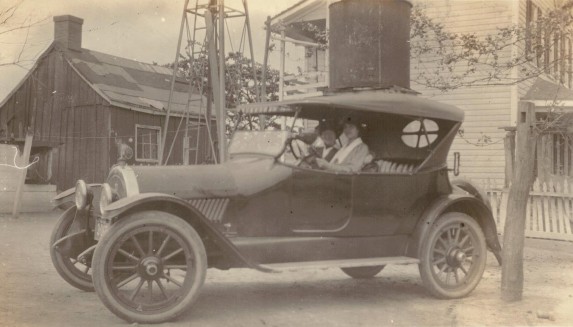 1918 Oldsmobile Roadster shown with Ethelene and her sister Celeste behind the wheel. Photo taken by Lewis Reed at the Clinton Clay Thomas family farm which was located on Butterfly Lane in Braddock, Maryland.

Lewis Reed’s Rockville Garage sold more than just Dodges. During the early years, Reed Brothers represented several franchise nameplates along with Dodge, including Oldsmobile, Hudson and Essex. The Hudson and Oldsmobile were sold at Reed Brothers from roughly 1917 through 1923.

The first advertisement below, distributed by the Oldsmobile Sales Company in the Sunday, June 29, 1919 edition of The Washington Post is the very first ad in which the Rockville Garage appeared. Dealers are listed in fine print at the bottom: note “Rockville Garage, Rockville, Md” which is highlighted in yellow.

This is a fun little song recorded in 1909. An Oldsmobile must have been quite the toy when this was recorded. From an old single sided VICTOR RECORD COMPANY 78 rpm record. Enjoy!