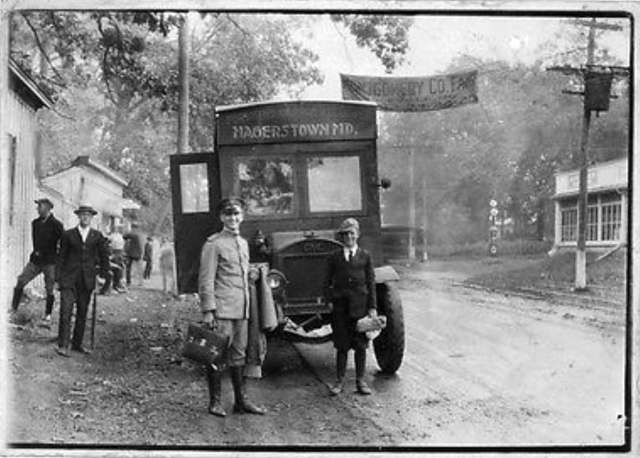 1922 GMC Hagerstown Bus taking on passengers at a bus stop across the street from Reed Brothers Dodge in Rockville, Maryland

Vehicles from this era are fascinating and are often photographed with equally fascinating surroundings. The photograph above is a unique, early photograph of a Hagerstown Bus owned by Forsyth’s Garage & Transfer of Rockville. The bus is an early GMC. The tag on bus is dated 1922 and behind the bus on the left is the bus station with signs that say “Pay Gate” and “Pass Gate”. The banner across the road says “Montgomery County Fair, Rockville, MD” and the dates. Directly across the street is Reed Brothers Dodge. The photograph was found on WorthPoint.com, an online resource for researching art, antiques and collectibles, etc.

The photograph below was taken by Lewis Reed during the same time frame only from a different perspective. It is also dated 1922, and the bus stop would have been right in front of the boarded fence across the main road (later the Rockville Pike). The Rockville Fair Grounds are just beyond the boarded fence. Buses and trolleys used to go past Reed Brothers as they traveled up Rockville Pike. The Fairgrounds was one of the stops along the line. 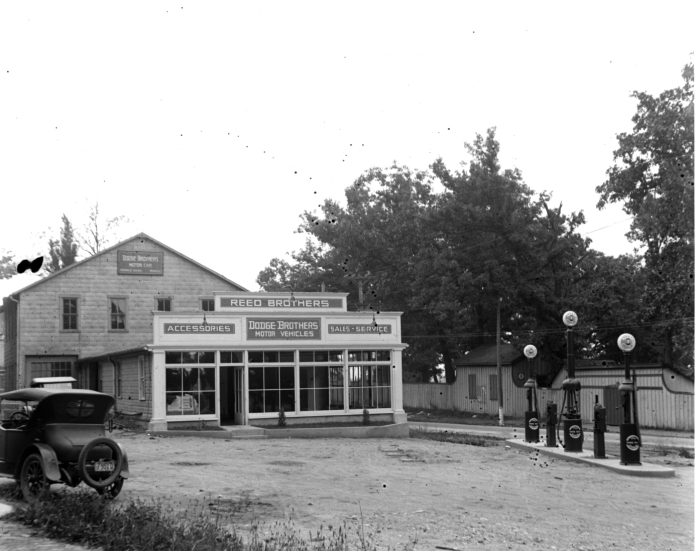 Reed Brothers Dodge, 1922. The original part of the garage was converted into a new car showroom and the service operation was moved out into the rear portion of the building. Note the “modern” gas pumps. The Rockville Fair Grounds are beyond the boarded fence.

I enjoy solving mysteries and digging deep to find information on vintage motor vehicles and today I am sharing what has turned up in my research.

I found an interesting article in the Motor Age, Volume 41, March 23, 1922 on page 16, titled – General Motors Develops Motor Bus, and I have extracted the article as follows:

A twenty-passenger motor bus was introduced by the General Motors Truck Company, Pontiac, Michigan, which is mounted on a chassis designed for this type of body. By combining a long wheelbase with long, flexible semi-elliptic springs together with 36 by 6 in. cord tires, easy riding qualities have been the result. The body overhangs the frame slightly which, it is said, eliminates much of the side-sway and whipping more or less common with buses mounted on a wheelbase length considerably shorter than the body. The frame on the chassis overhangs the rear axle but slightly.

The standard G.M.C. 2-ton powerplant is used and it is claimed that a road speed of 30 miles an hour, to which the bus is governed, is readily obtainable. In test, the bus fully loaded, was driven at 25 miles per hour up to a 4% grade on high gear. The G.M.C. 4 x 5 1/2 in. powerplant, which has been described in these pages, incorporates features such as removable cylinder sleeve, removable valve lifter assemblies, pressure lubrication, dual cooling, hot-spot vaporization, etc, and the governor equipment is a fly-ball type which has also been described.

The bus body for this new equipment is furnished with two seating arrangements, one adapted particularly to inter-urban bus operation and the other designed for city passenger work. The body is built of oak reinforced with metal and is finished outside in smooth paneled surfaces. In order to accommodate the narrow roads, the bus has been built to a width of 74 in. and the seating arrangement has been made to correspond with this width without sacrifice to comfort of balance.

The interior of the bus is finished in paneled oak with rattan seats. The equipment is complete including non-rattling adjustable windows, complete buzzer signal system, front entrance door controlled from the driver’s seat and rear emergency door. The equipment also includes a rear vision mirror, dome lights and an advertising card rack. The fuel tank is located outside and is filled from outside without inconvenience or fire risk. The fuel is fed to the engine by vacuum system.