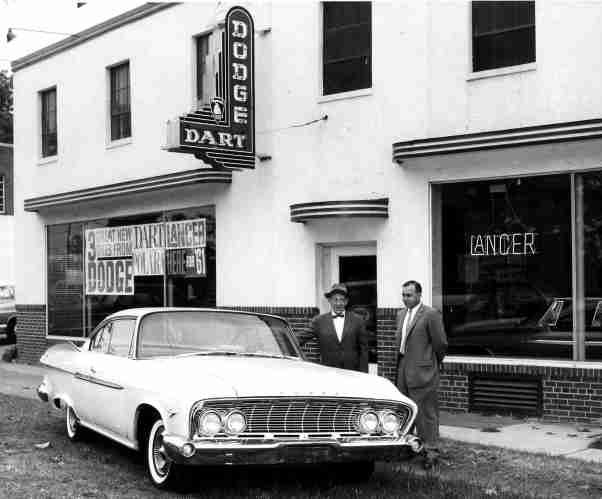 New car introduction was always one of the most exciting times at Reed Brothers Dodge. It was a once-a-year celebration that everyone looked forward to attending. For the salesman, it meant additional car sales. To the dealership, it was another method to reach out to hundreds of current and potential customers, not only for new car sales, but also to advertise the dealership’s other services. Many sales were made during new car introduction by those customers who had to be the first on their block to own one of the new models.

The car on display is a 1961 Dodge Polara 4-door sedan, Dodge’s top-of-the-line full-size car. The new look featured a wide, concave grille with low-mounted quad headlights and the curious reverse-slant fins. The name Polara is a reference to the Polaris star, in a marketing attempt to appeal to the excitement surrounding the Space Race during the early 1960s. In its various forms, the Polara name was used by Dodge until 1973, when its position in Dodge’s line-up was replaced by the Dodge Monaco.

To attract drive-by motorists, large signs were placed in the showroom windows hyping the new year models: Dart, Lancer and Polara. Back in the day, there was tremendous brand loyalty. Customers who bought Dodges, usually bought them for life. In fact, many former customers traded every year and would buy a car on the spot. In the 1960s, new car introduction was a much more important part of the American automotive buying habit. Today, it’s a thing of the past.

The photo was taken from the corner of Rockville Pike and what is now known as “Dodge Street”. The state of Maryland named the connector street behind the dealership’s original location, Dodge Street because Reed Brothers was located there for 56 years (1914-1970).