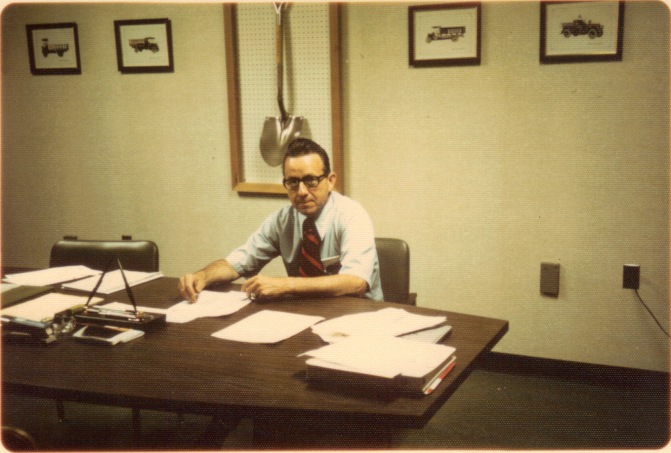 In honor of Father’s Day, I would like to dedicate this blog to the memory of my dad who passed away eight years ago on June 13, 2009. He was a young 88 years old and worked up until just two weeks before he died. Ernest Lee Gartner, who married Lewis Reed’s daughter, Mary Jane, joined Reed Brothers Dodge in 1949.

When Lewis Reed passed away on January 28, 1967, my dad continued the business as Dealer Principal making Reed Brothers Dodge a second generation dealer. Representing the 2nd generation, he took on a new set of challenges. When the state widened the roads in 1970, he purchased 4.37 acres of land from Eugene Casey and relocated Reed Brothers Dodge from its original location at the intersection of Veirs Mill Road and Rockville Pike to a new state-of-the-art showroom and Dodge/Chrysler/Jeep service complex on Route 355 at 15955 Frederick Road Rockville Maryland.

In comparison to Lewis Reed, whose dealership survived through World War I, The Great Depression and World War II, Lee Gartner successfully navigated Reed Brothers Dodge through numerous Chrysler setbacks during the 1970’s and 80’s, including the first Chrysler Bailout, the sale of Chrysler to Daimler, and the sale to the private equity firm Cerberus. He applied his 30+ years experience with Reed Brothers to meet the challenges of gasoline shortages, high interest rates, severe inflation, and weakening consumer confidence which drove Chrysler into financial crisis. This survival is testimony that he not only conquered setbacks, but often rebounded to reach new levels of success. These are pretty remarkable things.

My dad succumbed to metastatic melanoma on June 13, 2009, just four days after the loss of the family’s Dodge franchise. Though he later ceded control to his sons, he rarely missed a day of work. Until his untimely death, he was a fixture at the dealership and could be seen around just about every day watering flowers, reading his newspaper, walking through the shop, and greeting friends and customers in the showroom. The word “retirement” was not in my dad’s vocabulary. He showed no signs of stepping away from the dealership that he helped build for more than 60 years. He remained Chairman of the Board until his death.

I will always remember my dad as a successful businessman whose persistent energy was always there for family first, but in equal measure for the public he served. He was smart and also honest and dependable – characteristics that kept Reed Brothers Dodge at the pinnacle of auto dealerships throughout his career.

I never had a chance to tell my dad how much I admired him, but I remain proud of him and his accomplishments. Lee Gartner continued what Lewis Reed built from the ground up and helped make Reed Brothers Dodge into a successful family business that lasted almost a century.

I think of you, Dad, every day. For all who read this post, if you are lucky enough to still have your father with you, honor and treasure him, if not, remember him with a happy thought and a prayer for all he gave you.